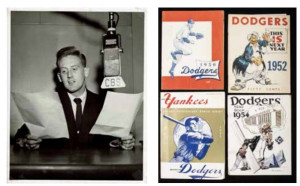 Hunt Auctions will present the personal collection of Hall of Fame member and iconic Dodgers sportscaster Vin Scully within its September 23, Live Internet Auction.  The auction was originally slated to take place live in Los Angeles as part of Hunt Auctions 16th annual MLB All-Star Game auction event but will now be conducted as a live online auction due to Covid-19 related constraints.

The Scully Collection consists of materials related to his incredible 67-year broadcasting career with the Brooklyn and Los Angeles Dodgers franchise. Vin Scully is widely regarded as the most revered and talented sportscaster in the history of American sport. Scully humbly began his iconic career in 1949 when he was recruited by CBS Sports Director Red Barber to broadcast collegiate football games. Vin’s abilities immediately became of notice when he worked his first game on the field at a frigid Boston University leading to Barber enlisting his talents to join him on the Dodgers broadcasts.  Beginning with the 1950 season in Brooklyn and coming to completion in 2016 in Los Angeles Vin Scully endeared himself to millions of baseball fans all around the world most notably of course in the Los Angeles area. His classic style and easy demeanor brought fans into the game of baseball in a manner not previously seen.  Countless immortal calls will bless baseball fans for future generations including his mark during the 1988 World Series after Kirk Gibson’s walk off home run, “In a year that has been so improbable, the impossible has happened.”

In addition to his legendary baseball career Scully worked within several other professional sports to include NFL and PGA TOUR Golf. His broadcasting skills were equally impressive on the gridiron and links with Scully elevating to work at the highest venue levels including the 1982 NFC Championship game making the call for “The Catch.”

“For 67 years, I have been blessed to have fulfilled a childhood dream of broadcasting baseball,” remarked Scully. “My journey began in Brooklyn with the likes of Duke Snider and Jackie Robinson and finished with Kirk Gibson and Clayton Kershaw in Los Angeles.  The sport has given a redheaded kid playing stickball in the streets of New York even more than he had nerve to pray for and allows my wife Sandi and me to contribute some assistance to Neuromuscular Research at UCLA to which my family is proud to support.  This auction contains pieces of my life and dreams as well as baseball memories. Here’s hoping they will be enjoyed by many.”

“Vin Scully is one of the most iconic figures in baseball history,” said David Hunt, President, Hunt Auctions. “Vin’s ability to make you feel as part of the game itself, part of a family, and with an uncommon humility was his unique genius.  The honor to associate with Vin Scully for this very special offering is without question one of the most significant in our 30-year company history.”

The Green Diamond Gallery Collection, curated by Bob Crotty of Dayton, Ohio, and the Barry Larkin Collection celebrating the Hall of Fame shortstop are also featured in the Sept. 23 auction.

Jerry Milani is a freelance writer and public relations executive living in Bloomfield, N.J. He has worked in P.R. for more than 30 years in college and conference sports media relations, two agencies and for the International Fight League, a team-based mixed martial arts league, and now is the PR manager for FAN EXPO, which runs pop culture and celebrity conventions across North America. Milani is also the play-by-play announcer for Caldwell University football and basketball broadcasts. He is a proud graduate of Fordham University and when not attending a Yankees, Rams or Cougars game can be reached at Jerry (at) JerryMilani (dot) com.
@gbpackjerry
Previous Veteran MMA Analyst Jimmy Smith to Host New Show on SiriusXM
Next Don C’s Jackie Robinson TOPPS Project 2020 Card Posts On Jackie Robinson Day