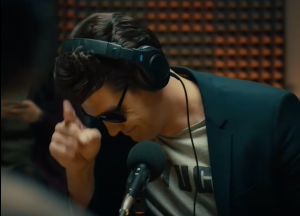 The personal rivalry between two former professional football quarterbacks trying to embark on post-athletic careers as sportscasters is at the center of “Now We’re Talking,” a half-hour, single-camera original comedy series created, executive produced, written by, and starring Tommy Dewey (“Casual”) and Tug Coker (“The Office”). The second season of the show will have its world premiere Thursday, September 17, on CW Seed. The never-before-seen second season consists of eight half-hour episodes, directed by Laura Murphy (“The Iliza Shlesinger Sketch Show”). The first season of the critically acclaimed sports comedy from Warner Bros.’ Blue Ribbon Content will also be available on CW Seed.

The athletic lives of former quarterbacks Tug Tanner (Coker) and Tommy Arondall (Dewey) peaked early. In season one, they found themselves falling from the top of their game to the bottom of their class in sports broadcasting school. “Now We’re Talking” takes a comedic look at their relationship after football, with the former adversaries now forced to work together to try to find success on a new playing field. They stumble at first, but soon begin to help each other attempt to find some dignity in a not-so-dignified world.

Season two finds the duo trying to apply what they have learned in broadcasting school to the actual job of broadcasting. Tug and Tommy take less-than-ideal positions at new streaming network CUSP Sports, swallowing their pride and hitting the road in an attempt to earn their stripes calling “fringe” sports like darts and competitive eating, all while managing increasingly complicated home lives. Little do they know, the institution to which they have pinned their hopes, CUSP, is crumbling beneath them.

The first season of the show was nominated for a Writers Guild of America Award in the Short Form New Media – Original category.

Jerry Milani is a freelance writer and public relations executive living in Bloomfield, N.J. He has worked in P.R. for more than 30 years in college and conference sports media relations, two agencies and for the International Fight League, a team-based mixed martial arts league, and now is the PR manager for FAN EXPO, which runs pop culture and celebrity conventions across North America. Milani is also the play-by-play announcer for Caldwell University football and basketball broadcasts. He is a proud graduate of Fordham University and when not attending a Yankees, Rams or Cougars game can be reached at Jerry (at) JerryMilani (dot) com.
@gbpackjerry
Previous Atalanta Inks NBC, FA Womens Super League Deals For 50 Matches
Next Behind the Scenes of Dispelling BUI Myths