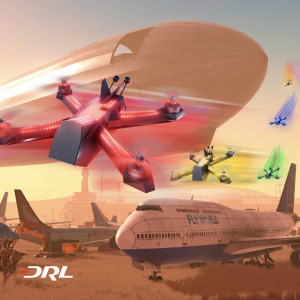 The Drone Racing League (DRL), the global, professional drone racing property, today teamed up with 2-time NBA Champion and 11-time NBA All-Star Chris Bosh ahead of their 2020 DRL Allianz World Championship Season, which starts tomorrow night, October 21st at 9pm ET on NBCSN, Twitter, and Facebook Watch. As Dean of DRL Academy, Bosh will lead the league’s STEM program to inspire the next generation of technologists and digital athletes while advancing diversity and inclusion in tech and sports.

DRL Dean Bosh and 2-time DRL Allianz World Champion Pilot JET will teach kids about the science behind the sport of high-speed drone racing through a newly launched fun, educational content series. Classmates tuning in can test their new learnings in the DRL SIM, an immersive drone racing game on Xbox and Steam that teaches players how to build and fly drones through interactive training missions. They can also watch the pros put DRL Academy lessons to real-world use: The 2020 Season features the best drone pilots in the world competing in the DRL SIM.

“Our sport is for infinite learners — and as parents continue to navigate the new playing field of education, we’re excited to offer dynamic STEM programming to supplement remote learning. DRL Dean Bosh had a championship career in the NBA, and he is bringing that same enthusiasm, intensity and dedication that he showed on the court to our DRL Academy. We look forward to inspiring kids together about science and technology on the fly,” said DRL President Rachel Jacobson.

Bosh, who studied at Georgia Tech before dominating the game of basketball, will bring his passion for technology and sports together as DRL Dean.

“I love engineering and technology and believe every kid should be given access to STEM education. With this year’s school closures, I became Principal Bosh for my five kids at home — and now, I’m thrilled to announce my promotion to Dean Bosh, and help kids around the world learn about science through the fun, high-tech, family-friendly sport of the Drone Racing League,” Bosh added.

With a new playing field of school back in session, DRL Academy is the new recess. Learn more at https://thedroneracingleague.com/

Jerry Milani is a freelance writer and public relations executive living in Bloomfield, N.J. He has worked in P.R. for more than 30 years in college and conference sports media relations, two agencies and for the International Fight League, a team-based mixed martial arts league, and now is the PR manager for FAN EXPO, which runs pop culture and celebrity conventions across North America. Milani is also the play-by-play announcer for Caldwell University football and basketball broadcasts. He is a proud graduate of Fordham University and when not attending a Yankees, Rams or Cougars game can be reached at Jerry (at) JerryMilani (dot) com.
@gbpackjerry
Previous Mike Krzyzewski Hosts Season Premiere of His SiriusXM Show Oct. 22
Next ‘Stealing First’ A Quick Read Of A Breadth Of Baseball Stories