Jerry Milani August 31, 2015 News, On The Air Comments Off on Hall Of Fame Broadcaster Vin Scully To Return For 67th Season 2,009 Views 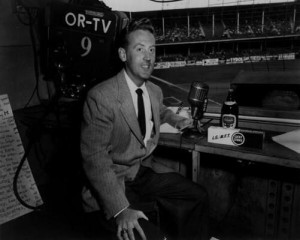 Hall of Fame broadcaster Vin Scully, an icon in American sports history, has announced he will return to the Dodgers broadcast booth for an unprecedented 67th season in 2016.

“I talked it over with my wife, Sandi, and my family and we’ve decided to do it again in 2016,” Scully said. “There’s no place like home and Dodger Stadium and we look forward to being a part of it with all of our friends.”

“Vin is a national treasure and the Dodgers couldn’t be happier to have him back at the microphone in 2016,” said Dodgers’ President and CEO Stan Kasten. “Vin makes every broadcast special and generation after generation of Dodger fans have been blessed to be able to listen to him create his poetic magic since 1950. We look forward to adding many new chapters to that legacy in 2016.”

Widely regarded as the finest sportscaster of all time, Scully’s 66 years of service mark the longest tenure in his field.

Scully began his professional baseball broadcasting career in 1950 with the Brooklyn Dodgers. He was inducted into the National Baseball Hall of Fame in 1982. During his unmatched career, he has called three perfect games, 25 no-hitters, 25 World Series and 12 All-Star Games. Iconic moments called by Scully include Kirk Gibson’s miraculous Game 1 homer in the 1988 World Series, Don Larsen’s perfect game in the 1956 World Series, Hank Aaron’s record-setting 715th home run, Sandy Koufax’s four no-hitters, including a perfect game, and the scoreless-inning streaks of Dodger greats Don Drysdale and Orel Hershiser.

When Scully began broadcasting, the Dodgers had yet to win a World Series. Three years later, at the age of 25, he became the youngest person to ever broadcast a World Series game. In 1955, he had his most memorable moment behind the microphone, as he called the Dodgers’ first and only championship in Brooklyn.

In Los Angeles, Scully has called Dodgers World Championships in 1959, ’63, ’65, ’81 and ’88 and he was elected the top sportscaster of the 20th century by the non-profit American Sportscasters Association.

Jerry Milani is a freelance writer and public relations executive living in Bloomfield, N.J. He has worked in P.R. for more than 30 years in college and conference sports media relations, two agencies and for the International Fight League, a team-based mixed martial arts league, and now is the PR manager for FAN EXPO, which runs pop culture and celebrity conventions across North America. Milani is also the play-by-play announcer for Caldwell University football and basketball broadcasts. He is a proud graduate of Fordham University and when not attending a Yankees, Rams or Cougars game can be reached at Jerry (at) JerryMilani (dot) com.
@gbpackjerry
Previous Topps and Carlos Correa Announce Exclusive Partnership
Next Nickelodeon and NASCAR Find Another Tie