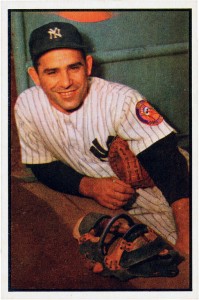 A trio of preeminent New York Times sports columnists – Dave Anderson, George Vecsey and Harvey Araton – will reflect on the extraordinary life and career of Yogi Berra in a panel discussion at the Yogi Berra Museum & Learning Center in Little Falls, N.J., on Monday, Oct. 19 at 7 p.m.

Copies of a New York Times commemorative book, “Yogi,” featuring rare photographs and stories edited by Anderson – will also be available for purchase.

Anderson, a Pulitzer Prize winner who covered Berra as a young reporter in the 1950s, will be joined by Vecsey, who began at the Times in the late 1960s and has written six national best-selling books, and Araton, a Montclair neighbor of Berra who also wrote the acclaimed 2012 book “Driving Mr. Yogi,” about his unique friendship with Ron Guidry.

Jerry Milani is a freelance writer and public relations executive living in Bloomfield, N.J. He has worked in P.R. for more than 30 years in college and conference sports media relations, two agencies and for the International Fight League, a team-based mixed martial arts league, and now is the PR manager for FAN EXPO, which runs pop culture and celebrity conventions across North America. Milani is also the play-by-play announcer for Caldwell University football and basketball broadcasts. He is a proud graduate of Fordham University and when not attending a Yankees, Rams or Cougars game can be reached at Jerry (at) JerryMilani (dot) com.
@gbpackjerry
Previous Topps Reveals First-Ever “Final Five” Fan Vote For 2016 Number One Card
Next Pacquaio Packs Politics, Boxing, Into His Business