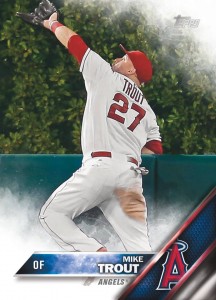 After thousands of online votes, the “Final Five” athletes have been chosen for a chance to be featured on Card No. 1 in 2016 Topps® Baseball Series One, joining a line of players that has included Hank Aaron, Ted Williams and Derek Jeter. It is the first time ever fans have participated in selecting the No. 1 card for the set.

Fans voted over the course of 10 days to whittle a list down to five athletes. Now, a new fan vote for the next week will pick just one of them. Voting for the final round will take place on Topps.com, and will end on October 12, 2015 at 11:59 p.m. ET.

Baseball fans are encouraged to vote and promote the contest on social media to help get their favorite player featured on Card. No. 1, and using the hashtag #VoteCardNo1.

Jerry Milani is a freelance writer and public relations executive living in Bloomfield, N.J. He has worked in P.R. for more than 30 years in college and conference sports media relations, two agencies and for the International Fight League, a team-based mixed martial arts league, and now is the PR manager for FAN EXPO, which runs pop culture and celebrity conventions across North America. Milani is also the play-by-play announcer for Caldwell University football and basketball broadcasts. He is a proud graduate of Fordham University and when not attending a Yankees, Rams or Cougars game can be reached at Jerry (at) JerryMilani (dot) com.
@gbpackjerry
Previous 2015 Ford C. Frick Award Ballot Finalized
Next New York Times Columnists Reflect On Yogi Berra In Oct. 19 Panel At Yogi Berra Museum