College Rugby Gets Another Kick

Jerry Milani February 9, 2016 News Comments Off on College Rugby Gets Another Kick 2,285 Views 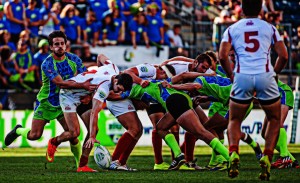 Is Penn Mutual becoming to rugby what Allstate is to college football? It appears so, as the Horsham, Pa.-based company today announced an extension of their landmark deal with the Collegiate Rugby Championships and The Varsity Cup for an unspecified number of years, along with an added investment to promote the sport through the work NBC Sports (a partner with New York-based United World Sports in the event) is doing to grow rugby as well.

The Penn Mutual Collegiate Rugby Championship, the largest collegiate rugby event in the world, and The Penn Mutual Varsity Cup, is the national collegiate championship of the 15-a-side rugby format. The CRC is played annually at Talen Energy (formerly PPL) Park, in Philadelphia (this year on June 4-5), while the Varsity Cup final will be held on May 7 at a TBD location.

“Our initial partnership far exceeded our expectations, and we are very excited to be able to work with UWS and NBC Sports to expand and extend our agreement,” said Eileen McDonnell, Penn Mutual’s Chairman, President & CEO in a statement. “We continue to grow our offerings and find new ways to reach the next generation of advisors and clients, and rugby has proven to be an extremely effective platform in reaching our objectives.”

“We remain bullish about rugby as both a collegiate and an Olympic property,” added Jon Miller, President, Programming, NBC Sports & NBCSN. “2016 is going to be an exciting year for the sport, highlighted by its return to the Olympics in Rio this August. We’re thrilled to showcase the best rugby at the collegiate and international levels this year, and we believe Penn Mutual’s commitment to the CRC and Varsity Cup demonstrates rugby’s upward trend in domestic popularity in the coming years.”

The expansion of the deal, which began in 2014, includes Penn Mutual holding title sponsorship for both events through 2019, a significantly expanded year-long presence across all NBC Sports Group and UWS rugby properties, including dedicated coverage of the women’s CRC final; and expanded marketing connections to more than 900 colleges and universities through official equipment and apparel provider, Rhino Rugby.

The Penn Mutual CRC, known as the “World’s Largest Collegiate Rugby Festival” also includes a collegiate women’s rugby bracket, and the National Small College Rugby Organization (NSCRO) national championship, as well as a national high school tournament with both boys and girls teams. Fields for each of those events will be announced in 2016.

If rugby continues to become the new football, Penn Mutual’s investment could pay off even larger.

Jerry Milani is a freelance writer and public relations executive living in Bloomfield, N.J. He has worked in P.R. for more than 30 years in college and conference sports media relations, two agencies and for the International Fight League, a team-based mixed martial arts league, and now is the PR manager for FAN EXPO, which runs pop culture and celebrity conventions across North America. Milani is also the play-by-play announcer for Caldwell University football and basketball broadcasts. He is a proud graduate of Fordham University and when not attending a Yankees, Rams or Cougars game can be reached at Jerry (at) JerryMilani (dot) com.
@gbpackjerry
Previous Super Bowl Ratings: Up or Down?
Next Expanded Women’s Collegiate Championship Field & Live National TV Broadcast of Women’s Championship Final Enhance the 2016 Penn Mutual Collegiate Rugby Championship in Philadelphia