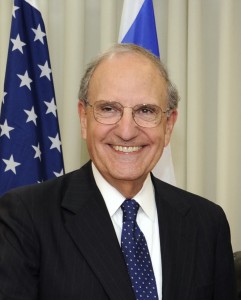 MP & Silva, the international media company leading the creation of the Americas Champions League (ACL), is proud to announce that Sen. George Mitchell was appointed as member of the league’s Advisory Board, alongside Paul Tagliabue, former NFL commissioner.

Americas Champions League (ACL) is a new annual football/soccer club competition to be played in North, Central, South America and the Caribbean. ACL will build unparalleled sporting rivalries throughout the Americas and help position storied clubs amongst the best in the world. MP & Silva is leading the development of this exciting project by bringing together some of the top business, legal and entrepreneurial minds from around the world to help build this tournament and to parallel the success of other sport competitions like the UEFA Champions League.

Senator George Mitchell has confirmed today that he is joining the Advisory Board of ACL. Since retiring from the U.S. Senate, Mitchell has taken up a variety of positions in politics and business. His excellence as an American lawyer, businessman and politician has played a role in his appointment as United States Special Envoy for Middle East Peace (2009-2011) as well as chairman of The Walt Disney Company (2004-2007) and later as chairman of the international law firm DLA Piper.

The objective of ACL’s Advisory Board is to gather top-ranked leaders in sports and business from all Americas regions to help guide the vision, launch, and on going success of the tournament. With their business acumen and global credibility backing the creation of the Americas Champions League, the project is getting off the ground with the full force of a major international sports league.

Sen Mitchell commented on his new role: “the Americas Champions League is a compelling sports venture. It offers commercial opportunities and new and exciting competition for fans. And it is rising at the right time. We want to start an international soccer league that is fully transparent and will empower the clubs, without threatening any existing competition.”

ACL will also provide an economic windfall to soccer in the Americas by generating revenues of at least $440 million to be shared with participating clubs annually, resulting in a minimum of $5 million in prize money per club, increasing each round, with up to $30 million for the winner.

The format for ACL will create exciting games, while minimizing travel and will be complimentary to existing competitions like the Copa Libertadores or CONCACAF Champions League. The competition’s schedule will be finalized in collaboration with the clubs, leagues, federations and other stakeholders with the goal of respecting all domestic and FIFA matches.

Riccardo Silva, founder of MP & Silva said: “It is a pleasure to welcome former Sen. Mitchell to the Advisory Board of the Americas Champions League. The ACL team is dedicated to building this competition to benefit South and North American soccer clubs, delivering the highest standards of expertise and transparency. Mitchell’s extensive experience will add a huge value to the project. With the Americas Champions League, both North and South American clubs will have the opportunity to compete at a global level, like the European clubs benefit through the European Champions League. Together with the clubs and the fans we all look forward to that day and today’s addition of Sen. Mitchell is a further step in this direction”.

Paul Tagliabue also showed his support: “I’m very excited to be part of the Americas Champions League project. The ACL leaders are working hard to make it happen so that a deep and diverse international fan base can get to see outstanding clubs in the Americas in a structured competition. With the Americas Champions League project, both North and South American clubs will have the opportunity to compete on the level that European clubs play in the UEFA Champions League. The Americas’ international soccer tradition, legacy and extraordinary fan base rank with the best in the world but a solid league platform to globally showcase Americas’ great soccer hasn’t existed until now.”

Jerry Milani is a freelance writer and public relations executive living in Bloomfield, N.J. He has worked in P.R. for more than 30 years in college and conference sports media relations, two agencies and for the International Fight League, a team-based mixed martial arts league, and now is the PR manager for FAN EXPO, which runs pop culture and celebrity conventions across North America. Milani is also the play-by-play announcer for Caldwell University football and basketball broadcasts. He is a proud graduate of Fordham University and when not attending a Yankees, Rams or Cougars game can be reached at Jerry (at) JerryMilani (dot) com.
@gbpackjerry
Previous Yahoo Sports Collaborates With PGA TOUR to Deliver Free Live Coverage & On-Demand Content to Golf Fans Globally
Next NESN.com Launches NESNFuel.com