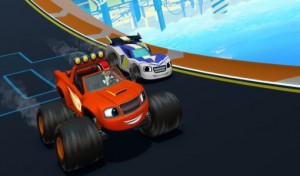 Nickelodeon shifts into high gear with a series of six all-new race car-themed episodes of the hit animated preschool series Blaze and the Monster Machines, featuring Blaze as a high-octane race car and guest voice appearances from superstar race car drivers Danica Patrick, Jimmie Johnson, Chase Elliott and Kasey Kahne. The first special, “Race Car Superstar,” premieres Monday, May 30, at 1:30 p.m. (ET/PT), followed by “Race to Eagle Rock” on Thursday, June 2, at 1:30 p.m. (ET/PT) on Nickelodeon.  The remaining four race car episodes will roll out this fall.  Blaze and the Monster Machines, which currently ranks as the number-one preschool show in its time period on all TV, follows the adventures of the amazing monster truck Blaze and his eight-year-old driver AJ.  It’s also the first preschool show on TV to comprehensively cover all areas of STEM (Science, Technology, Engineering, Math) in every episode. Blaze and the Monster Machines airs regularly at 1:30 p.m. (ET/PT) on Nickelodeon, the top network for preschoolers and kids 2-11.

In the specials, Blaze visits the racing town of VelocityVille, where all the cars love to go fast, and meets four new race cars: Rally (Patrick), a race car who is always first to the track and never misses a chance to hit the raceway; Dash (Johnson), a car that is fun, friendly, fast and the ultimate racing buddy for Blaze; Mark Set-Go (Elliott), VelocityVille’s sensational starter who kicks off each racing adventure with rock-star style and a signature rhyme; and Fender (Kahne), a car that rules the raceway, but is excited to share the track with Blaze.

In “Race Car Superstar,” a car named Speedrick puts locks on the tires of other cars so they are stopped in their tracks, forcing Blaze to transform into a sleek and aerodynamic race car to free his new friends.  Then, in “Race to Eagle Rock,” Blaze brings all of his monster truck pals to VelocityVille for a wild race to the top of Eagle Rock. After they all transform into race cars with supercharged engines, they have to find a way to avoid Crusher’s attempts to slow them down.

Beginning today, the Blaze and the Monster Machines App will feature a brand-new VelocityVille location, an update with 15 new levels that focus on the STEM concept of velocity.  Users can help Blaze and AJ compete against other monster trucks–Starla, Darington, Crusher, Stripes and Zeg–in one of six locations (The Badlands, Top of the World, Dragon Island, The Snowy Slopes, The Monster Dome or VelocityVille) and use blazing speed and problem-solving to overcome obstacles along the way. The update is available today on iOS and Google Play, with Amazon coming soon. Leading up to the Blaze and the Monster Machines race car specials, NickJr.com and the Nick Jr. App will feature an exclusive first-look at the race-inspired episodes starting Monday, May 23.

In Blaze and the Monster Machines, the amazing monster truck Blaze and his eight-year-old driver AJ have adventures that explore the physics of how things move; tackle problems through scientific inquiry and mathematics; and discover the parts needed to make everyday technologies work. Each action-packed episode is filled with monster trucks, physical humor and upbeat original songs with lyrics that highlight a STEM concept such as adhesion, friction, force, trajectory and magnetism. Blaze and the Monster Machines is created by Jeff Borkin (Team Umizoomi head writer) and Ellen Martin (Bubble Guppies supervising producer).

Jerry Milani is a freelance writer and public relations executive living in Bloomfield, N.J. He has worked in P.R. for more than 30 years in college and conference sports media relations, two agencies and for the International Fight League, a team-based mixed martial arts league, and now is the PR manager for FAN EXPO, which runs pop culture and celebrity conventions across North America. Milani is also the play-by-play announcer for Caldwell University football and basketball broadcasts. He is a proud graduate of Fordham University and when not attending a Yankees, Rams or Cougars game can be reached at Jerry (at) JerryMilani (dot) com.
@gbpackjerry
Previous NBA And BroadbandTV Launch Groundbreaking Multi-Platform Network: NBA Playmakers
Next ‘Reign Men’ – Dynasty Debate On Sunday at Yogi Berra Museum