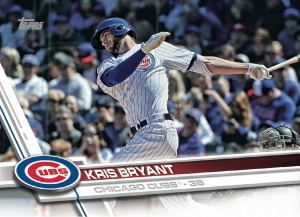 Baseball fans have voted for the next player to be on Card No. 1 for 2017 Topps® Baseball.

“It’s a huge honor with Card No. 1 depicting legends before me,” Bryant said. “It’s very humbling and nice to know it came from the fans.”

Bryant has earned a number of accolades in his young baseball career. In 2015, he won the NL Rookie of the Year and took the MVP crown just a year later. The two-time All-Star put up impressive numbers including 30 home runs, 102 RBI, a league-leading 121 runs scored, and a .292 batting average last season.

“Kris Bryant is an outstanding player with an infectious personality,” said David Leiner, General Manager and Vice President of Topps North American Sports & Entertainment. “He’s done so much in his career and has created fans throughout baseball regardless of team loyalties. He’s the perfect pick for Card No. 1 for 2017 Topps Baseball.”

Bryant joins a long list of great players who have been represented on the first Topps card of the year from Jackie Robinson and Ted Williams to Mike Piazza and Derek Jeter.

The one-week online vote occurred in October of last year where fans chose from a list of 16 nominees on Topps.com. Topps started the Vote for Card No. 1 in 2016 when Angels outfielder Mike Trout earned the honor in the inaugural vote.

Topps celebrates the return of the baseball season with release of 2017 Topps Baseball Series 1 on February 1st. Baseball fans can find the newest Topps baseball product in hobby shops, mass retailers and at Topps.com.

Jerry Milani is a freelance writer and public relations executive living in Bloomfield, N.J. He has worked in P.R. for more than 30 years in college and conference sports media relations, two agencies and for the International Fight League, a team-based mixed martial arts league, and now is the PR manager for FAN EXPO, which runs pop culture and celebrity conventions across North America. Milani is also the play-by-play announcer for Caldwell University football and basketball broadcasts. He is a proud graduate of Fordham University and when not attending a Yankees, Rams or Cougars game can be reached at Jerry (at) JerryMilani (dot) com.
@gbpackjerry
Previous WWE® Superstar John Cena® To Host Nickelodeon’s 2017 Kids’ Choice Awards, Live On Saturday, March 11, 2017
Next Hall Of Fame Coach And Basketball Institution To Be Chronicled In Showtime Sports® Six-Part Digital Documentary “Legacy: Bob Hurley”