Jerry Milani January 26, 2017 News, On The Air Comments Off on Hall Of Fame Coach And Basketball Institution To Be Chronicled In Showtime Sports® Six-Part Digital Documentary “Legacy: Bob Hurley” 2,145 Views 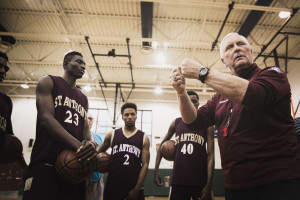 Bob Hurley has led the Jersey City boys’ basketball team at Saint Anthony to a remarkable 28 New Jersey State Championships including a string of nine straight state titles in his nearly 50 years as head coach. He’s been recognized with four National Coach of the Year Awards and, perhaps more importantly, quietly boasts a 100 percent college acceptance rate for the seniors on his team. But a financial crisis threatens to shutter the inner-city private school if it can’t raise upwards of $10 million in order to keep the school open for the coming years.

Legacy: Bob Hurley, an exclusive online release, will document the 2016-17 season, the latter half in real-time, with the weekly release of 10-minute segments that introduce viewers to a man that has created a bona fide basketball factory at a modest school with an enrollment of less than 200 students.

“It’s not just the future of my players I’m concerned with,” said Coach Hurley. “Saint Anthony is an important part of the history and culture of downtown Jersey City and there are nearly 200 students at the school who are counting on all of us to give them the educational foundation they need to succeed. I am hopeful about the future of Saint Anthony but we still need financial help to keep our school sustainable for years to come.”

“Intimate access and high-stakes drama are the hallmarks of SHOWTIME Sports documentary programming,” said Stephen Espinoza, Executive Vice President and General Manager, SHOWTIME Sports. “Legacy: Bob Hurley shines a light on an unsung sports hero and an American basketball institution at a crucial time in the life of both.

“The unique distribution of this project offers viewers a chance to sample the contemporary and compelling subject matter SHOWTIME examines in this genre,” Espinoza continued. “We’ve brought viewers unprecedented access to top-flight college football programs, to the Stanley Cup Playoffs, and to some of the biggest names and stories in sports including Kobe Bryant and Ben Simmons when it matters most. Legacy: Bob Hurley gives us the opportunity to promote these and upcoming titles to a broad audience while giving non-subscribers a taste of what they’re missing on SHOWTIME.”

The Saint Anthony Friars are coming off an undefeated season, their eighth overall since Hurley became head coach in 1972. Hurley has transformed Saint Anthony into the heartbeat of a tough, unforgiving city, instilling the values of commitment and success in the more than 200 Friars who have graduated and continued their careers at the collegiate level.

In Legacy: Bob Hurley, viewers will follow along week-by-week as the dramatic season unfolds with the future of the institution hanging in the balance.

Legacy: Bob Hurley is produced and directed by SHOWTIME executive Brian Dailey, co-directed by Luis Krubich and written by Mark Kriegel. It is the latest in an expansive lineup of unscripted programming from SHOWTIME Sports. Additional titles include “ONE & DONE” (Ben Simmons), “RUNNING FOR HIS LIFE: The Lawrence Phillips Story”, “KOBE BRYANT’S MUSE,” “PLAY IT FORWARD” (Tony Gonzalez), “IVERSON,” “I AM GIANT: Victor Cruz,” “THE DREW” (Baron Davis), and “DEAN SMITH.”

Jerry Milani is a freelance writer and public relations executive living in Bloomfield, N.J. He has worked in P.R. for more than 30 years in college and conference sports media relations, two agencies and for the International Fight League, a team-based mixed martial arts league, and now is the PR manager for FAN EXPO, which runs pop culture and celebrity conventions across North America. Milani is also the play-by-play announcer for Caldwell University football and basketball broadcasts. He is a proud graduate of Fordham University and when not attending a Yankees, Rams or Cougars game can be reached at Jerry (at) JerryMilani (dot) com.
@gbpackjerry
Previous Baseball Fans Vote Kris Bryant to Card No. 1 for 2017 Topps Baseball
Next Foley’s NY Pub & Restaurant Announces ‘Battle of the Irish QBurgers’