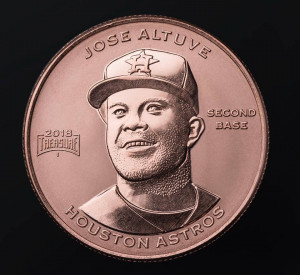 Two decades ago, the U.S. Mint began issuing quarters with reverse designs celebrating each of the 50 states. The program was a huge hit, renewing interest in coin collecting and inspiring a series Presidential dollar coins that was not quite as successful but did boost interest in the hobby.

Perhaps with the popularity of those programs in mind—and adding in the twist of the “blind chase” that opening a sealed pack of cards provides, official MLB and MLBPA licensee Baseball Treasure last week announced a set of coins featuring stars of all 30 teams in copper, silver and gold. They were designed by Todd Radom, an independent graphic designer specializing in branding for professional sports franchises and events. His work includes the official logos for Super Bowl XXXVIII and the 2009 NBA All Star Game, as well as the graphic identity for Major League Baseball’s Washington Nationals and Los Angeles Angels.

For the first time ever, a star from every Major League team has been minted in a one-ounce copper coin presented in a full color cardboard mount. Each coin displays the player’s name, position, and etched portrait on the front (or heads), and an action image with a few 2017 stats or accomplishments on the back (or tails). The packs, which are the same size as standard trading cards, retail at $6.95 each.

“Baseball Treasure offers the thrill of the chase’,” said co-founder Rick Canale. “With Baseball Treasure, we have added the excitement of including the gold and silver coins. You never know who or what coin you might get.”

Jerry Milani is a freelance writer and public relations executive living in Bloomfield, N.J. He has worked in P.R. for more than 30 years in college and conference sports media relations, two agencies and for the International Fight League, a team-based mixed martial arts league, and now is the PR manager for FAN EXPO, which runs pop culture and celebrity conventions across North America. Milani is also the play-by-play announcer for Caldwell University football and basketball broadcasts. He is a proud graduate of Fordham University and when not attending a Yankees, Rams or Cougars game can be reached at Jerry (at) JerryMilani (dot) com.
@gbpackjerry
Previous FOX Teams with Ericsson, Intel, AT&T to Deliver 4K over 5G at 2018 U.S. Open
Next Winters Rock Entertainment to Produce Feature Length Documentary Film Showcasing Professional MMA Fighter Marcus Kowal