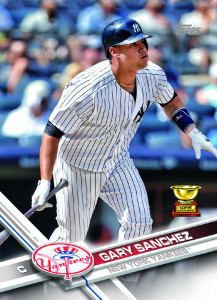 New York Yankees star catcher Gary Sanchez, who hit 20 home runs in 53 games in his rookie season in 2016, may or may not be the next Mickey Mantle in the Yankees lineup. But the powerful 24-year-old is following in The Mick’s footsteps in another way for Yankees fans and card collectors—the storied No. 7 card in the recently released Topps® 2017 Series 1 Baseball set.

Card No. 7 had been reserved for Mantle since his death in 1995. Beginning with the 1996 flagship set, Card No. 7 had been either Mantle or, for a few years, no one. That meant a gap in the checklist for the years in which Topps did not have an agreement with the Mantle estate to include his card in that particular year.

Enter Sanchez, whose exploits earned him runner-up status in the American League Rookie of the Year voting, despite playing less than half the season in pinstripes.

“Baseball fans are witnessing a great time in baseball right now with an impressive young group of players,” said Kevin Eger, Topps Brand Manager. “We felt it was time to offer Card No. 7 to a young, emerging star, but we still wanted it to be a New York Yankee. Gary Sanchez is part of the re-emergence for the Yankees, helping to bring that certain mystique back to the team. He felt like a natural fit for Card No. 7.”

The Sanchez card was issued earlier this month along with N.L. MVP Kris Bryant‘s No. 1 card, the “Ultimate Card Giveaway” of two million cards from throughout Topps’ 66-year history and a series of First Pitch™ insert cards in its Series 1.

Jerry Milani is a freelance writer and public relations executive living in Bloomfield, N.J. He has worked in P.R. for more than 30 years in college and conference sports media relations, two agencies and for the International Fight League, a team-based mixed martial arts league, and now is the PR manager for FAN EXPO, which runs pop culture and celebrity conventions across North America. Milani is also the play-by-play announcer for Caldwell University football and basketball broadcasts. He is a proud graduate of Fordham University and when not attending a Yankees, Rams or Cougars game can be reached at Jerry (at) JerryMilani (dot) com.
@gbpackjerry
Previous Hall of Fame Sportscaster Dick Stockton Launches New Podcast, Debut Tuesday
Next ‘Andre The Giant’ to Debut on HBO