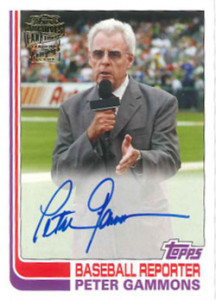 Cohen, a Queens native, has served as the play-by-play-announcer for all regular-season SNY produced Mets telecasts since 2006. He also participates on SNY’s sports and entertainment programs and is a contributor to the network’s website, www.sny.tv.

Gammons is a Hall of Fame baseball columnist and he has covered the game of baseball for the Boston Globe, ESPN and the MLB Network. GammonsDaily.com features analysis from Peter Gammons as well as some of nation’s top baseball analysts.

The 2017 season marks Castiglione’s 35th behind the microphone on Red Sox radio. A 2014 Red Sox Hall of Fame inductee, he previously handled play-by-play for the Cleveland Indians on television in 1979 and 1982 and broadcast the Milwaukee Brewers on TV in 1981.

Rosenthal joined Fox Sports in August 2005. He is a senior writer for FOXSports.com, a field reporter for MLB on FOX, and also is an insider for MLB Network. Previously, he worked for the Sporting News, Baltimore Sun, Courier-Post (N.J.) and York (Pa.) Daily Record.

Jerry Milani is a freelance writer and public relations executive living in Bloomfield, N.J. He has worked in P.R. for more than 30 years in college and conference sports media relations, two agencies and for the International Fight League, a team-based mixed martial arts league, and now is the PR manager for FAN EXPO, which runs pop culture and celebrity conventions across North America. Milani is also the play-by-play announcer for Caldwell University football and basketball broadcasts. He is a proud graduate of Fordham University and when not attending a Yankees, Rams or Cougars game can be reached at Jerry (at) JerryMilani (dot) com.
@gbpackjerry
Previous NBC Sports Group Presents Live Coverage Of Penn Mutual Collegiate Rugby Championship
Next Russell Wilson Three Peats As Host of Nickelodeon Kids Choice Sports