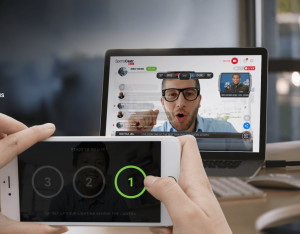 As the landscape of sports broadcast continues to shift, 14-year NBA veteran and current NBA TV studio analyst Steve Smith has joined forces with the prestigious team of sports executives behind SportsCastr.Live, a pioneering video platform that redefines what it means to ‘call a game.’ The live streaming platform – currently in public beta – allows users to be color commentators and enables viewers to select which sportscaster they wish to have call, recap or make predictions on a game.

“Clearly, we are seeing major shifts in how audiences watch sports,” said Smith. “I am very intrigued by this new platform… which is poised to revolutionize the way fans consume their sports content.”

SportsCastr.Live, which boasts adaptive bit-rate technology and ultra-fast delivery, differentiates itself from other live video platforms like Periscope or Facebook Live by offering sports broadcast features that used to only be available in a studio setting. This includes the ability for users to enhance their streams with real-time scoreboards, on-air motion graphics and augmented reality…making it look like they are live on TV, regardless of their location. Plus, all elements are clickable and interactive, allowing viewers to engage with the ‘broadcaster’ in ways never before possible. Sports fans are able to discover broadcasters from around the world and follow their favorite personalities.

“When it comes to game broadcasts, fans want what they want, on whatever device they want, whenever they want it. Now, SportsCastr.Live adds a whole new dimension by giving viewers another choice: announced by whomever they want…even if it is themselves,” said Stern. “This platform will redefine what it means to ‘call a game.’ Think about it: you can stream the game, watch it in VR, get real-time stats and info, etc. Now you can choose your broadcaster and that person has access to all the bells and whistles necessary to deliver a ‘network quality’ broadcast.”

SportsCastr.Live is currently in public beta and is available for free on the iTunes App Store. Users can also access the platform via the web at https://sportscastr.live/

Jerry Milani is a freelance writer and public relations executive living in Bloomfield, N.J. He has worked in P.R. for more than 30 years in college and conference sports media relations, two agencies and for the International Fight League, a team-based mixed martial arts league, and now is the PR manager for FAN EXPO, which runs pop culture and celebrity conventions across North America. Milani is also the play-by-play announcer for Caldwell University football and basketball broadcasts. He is a proud graduate of Fordham University and when not attending a Yankees, Rams or Cougars game can be reached at Jerry (at) JerryMilani (dot) com.
@gbpackjerry
Previous Russell Wilson Three Peats As Host of Nickelodeon Kids Choice Sports
Next Spider-Man, NBA Fan: Sony Pictures And ESPN Team Up For Four Innovative Spots Airing During NBA Finals