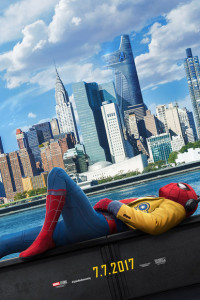 When fans tune into the NBA Finals on ABC, they’ll be joined by two superfans – superheroes Peter Parker/Spider-Man and Tony Stark/Iron Man.

In advance of the July 7 release of “Spider-Man: Homecoming,” this summer’s most highly anticipated movie, ESPN CreativeWorks and Sony Pictures have collaborated on a series of four spots that will air throughout the NBA Finals.  The creative follows Spider-Man (Tom Holland) when he is invited to an NBA Finals viewing party hosted by Tony Stark/Iron Man (Robert Downey Jr.), but runs into multiple hurdles that could make him miss the party.  Stark’s loyal assistant, Happy Hogan (Jon Favreau) also appears as he tries to pull off the party without a hitch.

In a first for ESPN CreativeWorks, the spots will include a highlight from the game airing that night, nearly live, as Spider-Man sees the actual footage of the game he is missing.  All four spots will run during the Finals across television, digital, and social media platforms on ABC/ESPN.

The creative is directed by Jon Watts, the director of Spider-Man: Homecoming.

“Our in-house creative team, CreativeWorks, worked with Sony Pictures to develop a unique, fun story across this creative series while incorporating cutting-edge technology that connects the spots to an exciting highlight that just happened live moments earlier in the game,” said Carrie Brzezinski, Vice President of Marketing Solutions, ESPN.  “Additionally, we were thrilled to bring fans a star-studded cast from the world of sports and pop culture with new surprises in each piece of creative.”

Jerry Milani is a freelance writer and public relations executive living in Bloomfield, N.J. He has worked in P.R. for more than 30 years in college and conference sports media relations, two agencies and for the International Fight League, a team-based mixed martial arts league, and now is the PR manager for FAN EXPO, which runs pop culture and celebrity conventions across North America. Milani is also the play-by-play announcer for Caldwell University football and basketball broadcasts. He is a proud graduate of Fordham University and when not attending a Yankees, Rams or Cougars game can be reached at Jerry (at) JerryMilani (dot) com.
@gbpackjerry
Previous NBA Legend & Basketball Analyst Steve Smith Joins David Stern & Others On Investment Team For SportsCastr.Live, Recently Announced Video Platform for Sports
Next CBS Sports and Tough Mudder Expand Broadcast Partnership