Home / News / Coverage of The 146th Open on SiriusXM

Coverage of The 146th Open on SiriusXM 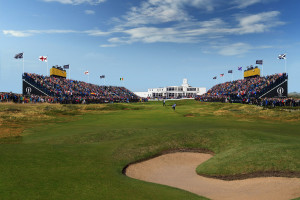 SiriusXM will offer subscribers extensive coverage of The 146th Open from Royal Birkdale in Southport, England, featuring 48 total hours of live on-course play-by-play plus daily talk programming hosted by the 1989 Champion Golfer of the Year Mark Calcavecchia and other major champions.

Live championship play-by-play, featuring IMG’s @TheOpen Radio broadcasts, will air across all four days of play, today through Sunay, on the SiriusXM PGA TOUR Radio channel, which is available to subscribers on satellite radios (Sirius channel 208, XM channel 92) and on the SiriusXM app.

Tournament broadcasts will begin on SiriusXM PGA TOUR Radio on Thursday and Friday at 2:00 am ET, and on Saturday and Sunday at 4:00 am ET, and will continue through the conclusion of each day’s play.

“With 48 hours of live championship play-by-play, our terrific lineup of show hosts, and a special on the history of The Open featuring some of its greatest champions, SiriusXM listeners get an exceptional and comprehensive broadcast experience throughout Open week,” said Scott Greenstein, SiriusXM’s President and Chief Content Officer.

NBC Sports Group owns the rights to The Open broadcasts in the U.S.  NBC Sports will provide exclusive television and streaming coverage of The Open from Royal Birkdale on NBC and Golf Channel.

Jerry Milani is a freelance writer and public relations executive living in Bloomfield, N.J. He has worked in P.R. for more than 30 years in college and conference sports media relations, two agencies and for the International Fight League, a team-based mixed martial arts league, and now is the PR manager for FAN EXPO, which runs pop culture and celebrity conventions across North America. Milani is also the play-by-play announcer for Caldwell University football and basketball broadcasts. He is a proud graduate of Fordham University and when not attending a Yankees, Rams or Cougars game can be reached at Jerry (at) JerryMilani (dot) com.
@gbpackjerry
Previous Mylan World TeamTennis Partners With ESPN To Introduce First In-Match Player Microphones During Professional Tennis Competition
Next Big Sky Conference To Air All Live Streamed Events For Free On Pluto TV For The 2017-2018 Season