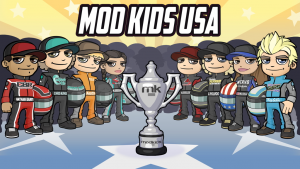 Mud flies in the film as these skilled juniors effortlessly drift corners, launch from jumps, and occasionally somersault end-over-end in their quest of becoming the next champion.

“These kids are learning tremendous skills for what it takes to go fast,” said Kyle DeLuc, current LOORRS Pro4 Champion. “And they do it at speed in tiny cars that shouldn’t technically be possible! But they’re getting it done and they do it with style. Of course, they occasionally crash horribly, or take each other out. But this is full-blown, off-road racing at its finest!”

Everything you’d expect from a racing film is here – high-speed action, big crashes, politics, relationships, competitive door-to-door racing, and driver rivalries. And, of course, no junior competition is complete without a dose of parent rivalry – Little League has nothing on these Moms and Dads!

MTRV8 has initiated a Kickstarter project to raise awareness for the movie and secure the funds to ensure this movie gets the treatment it deserves.

A variety of rewards are available to backers who pledge funds to the campaign. The most exciting reward is the opportunity to secure a MTRV8 R/C Truck at an unbelievably low price before its official release.

“This is a story that needed to be told,” said producer Chris James. “These kids are incredibly talented and deserve a larger fan base and sponsorship. I’m confident this film will turn many onto this action-packed series.”

Jerry Milani is a freelance writer and public relations executive living in Bloomfield, N.J. He has worked in P.R. for more than 30 years in college and conference sports media relations, two agencies and for the International Fight League, a team-based mixed martial arts league, and now is the PR manager for FAN EXPO, which runs pop culture and celebrity conventions across North America. Milani is also the play-by-play announcer for Caldwell University football and basketball broadcasts. He is a proud graduate of Fordham University and when not attending a Yankees, Rams or Cougars game can be reached at Jerry (at) JerryMilani (dot) com.
@gbpackjerry
Previous Equestrian Lifestyle Channel RIDE TV Continues To Expand In Canada
Next New Era & Topps Partner on Caps Celebrating Historic & Modern Baseball Card Designs