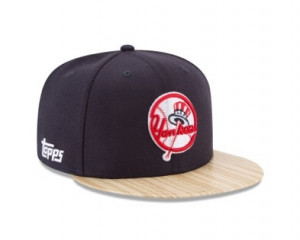 The 9FIFTY® snapback caps, which are available at NewEraCap.com, Topps.com, MLBShop.com, Lids.com, retail locations within select MLB ballparks and a handful of other retailers throughout the U.S. beginning the week of July 31, will feature all 30 MLB teams in both styles and retail for $34.

The New Era MLB 1987 Topps 9FIFTY cap features a team-color crown with the team logo used in the 1987 card design embroidered on the front, a wood-grain applique on the visor and the Topps’ “The Real One!” tagline on the back. The New Era MLB 2017 Topps Chrome 9FIFTY features a team color crown with a LiquidChrome™ team logo on the front, a chrome sublimation print on the visor featuring the team logo in the 2017 Topps card design and a silver snap closure on the back.

“This collaboration between two heritage brands aligned with Major League Baseball allows fans to rekindle their baseball memories from the past while also offering a modern twist to create additional memories for the future,” said Tony DeSimone, Baseball Category Director at New Era Cap. “Topps has been a great partner in helping us design and produce these caps that will surely resonate with both longtime and newer baseball fans.”

“The New Era caps are a great way to bring many baseball fans back to their childhoods while showcasing the new technologies that Topps has to offer on modern cards,” said Dan Kinton, Vice President of Sales and Marketing at Topps. “Seeing the Topps designs brought to life on New Era caps has been nothing short of amazing. The New Era caps really capture the essence of the card designs.”

The two iconic baseball licensees also announced they are partnering on an exciting 32-card trading card set that will be available exclusively at MLB ballparks when purchasing select Topps and New Era product beginning on Aug. 1. Fans will receive one pack including eight limited-edition cards when purchasing a New Era cap and Topps Team-Card set at any participating MLB ballpark retail location. Fans will receive one card pack per purchased cap and team-card set, while supplies last.

Jerry Milani is a freelance writer and public relations executive living in Bloomfield, N.J. He has worked in P.R. for more than 30 years in college and conference sports media relations, two agencies and for the International Fight League, a team-based mixed martial arts league, and now is the PR manager for FAN EXPO, which runs pop culture and celebrity conventions across North America. Milani is also the play-by-play announcer for Caldwell University football and basketball broadcasts. He is a proud graduate of Fordham University and when not attending a Yankees, Rams or Cougars game can be reached at Jerry (at) JerryMilani (dot) com.
@gbpackjerry
Previous MTRV8 Announces First Feature Film, Mod Kids USA, Kickstarter Project
Next The Drone Racing League Premieres Allianz World Championship Race, 2017 Season Finale On ESPN