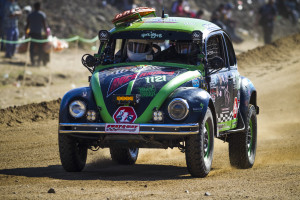 From acclaimed documentary film director Dana Brown (“Dust to Glory,” “On Any Sunday – The Next Chapter” and “Step Into Liquid”) and executive producer Bud Brutsman, comes “Dust 2 Glory,” the much-anticipated follow-up to “Dust to Glory,” which redefined the motorsports action documentary.

“Dust 2 Glory” will showcase the 2016 SCORE World Desert Championship racing season, including the epic SCORE Baja 1000, the world’s toughest point-to-point desert race across a one-thousand-mile course in Mexico’s untamable Baja California Peninsula. In addition to the feature content, moviegoers will also enjoy exclusive interviews with the greatest SCORE Baja desert-racers of all time – past and present.

This 18-month project – to be released in conjunction with the 50th anniversary of the SCORE Baja 1000 – debuts in U.S. cinemas for one night on Wednesday, December 6 at 7:30 p.m. local time, from Fathom Events and SCORE International, as the grand finale of the anniversary celebrations.

Tickets for “Dust 2 Glory” can be purchased beginning Monday, October 23 by visiting www.FathomEvents.com or at participating theater box offices. For a complete list of theater locations visit the Fathom Events website (theaters and participants are subject to change).

“Dust 2 Glory has been a two-year labor of love,” said Brown. “Getting the chance to return to Baja – and to chronicle an entire SCORE season and the racers – has been the best filmmaking experience of my life. This is the story of the off-road racing family and Baja that I have always wanted to tell.”

On two wheels or four, “Dust 2 Glory” showcases the brutal beauty of SCORE off-road racing with blazing, high-octane action sequences from a multitude of angles inside and outside the cockpit. Viewers will witness the insane antics of the true kings of the sport, the ground-pounding, 900-horsepower Trophy Trucks as they roar through the desert, mountains and playas of the Baja Peninsula.

“Fathom is thrilled to bring ‘Dust 2 Glory’ to movie theaters, giving audiences a chance to witness this epic race and meet the people behind the wheel,” said Fathom Events CEO Ray Nutt. “‘Dust to Glory’ is known by fans for highlighting the drama and personalities during an arduous race. Similarly, we expect ‘Dust 2 Glory’ to excite new fans and to reenergize motorsports lovers nationwide.”

“SCORE is honored, humbled and proud to be caretakers of the SCORE Baja 1000 – an international motorsports treasure,” said Roger Norman, SCORE CEO/president. “We were awed by the original ‘Dust to Glory’ that showcased the SCORE Baja 1000 and we know we will be amazed at the new ‘Dust 2 Glory’ that will spotlight the entire four-race SCORE World Desert Championship. This sport documentary will provide a unique, personal, in-depth look at the action, pride, passion and pageantry of the events, the competitors and the mysterious, magnificent and majestic Baja peninsula.”

“Dust 2 Glory” is produced by BCII, in association with SCORE International and Dana Brown Films.

Jerry Milani is a freelance writer and public relations executive living in Bloomfield, N.J. He has worked in P.R. for more than 30 years in college and conference sports media relations, two agencies and for the International Fight League, a team-based mixed martial arts league, and now is the PR manager for FAN EXPO, which runs pop culture and celebrity conventions across North America. Milani is also the play-by-play announcer for Caldwell University football and basketball broadcasts. He is a proud graduate of Fordham University and when not attending a Yankees, Rams or Cougars game can be reached at Jerry (at) JerryMilani (dot) com.
@gbpackjerry
Previous DraftKings Advances Footprint in Streaming Space With TuneIn Partnership
Next Topps Reaches 1,000,000 NOW Cards Sold