Jerry Milani May 25, 2016 News, On The Air Comments Off on The Basketball Tournament presented by Jack Link’s® Protein Snacks And ESPN Announce Expanded 2016 Coverage Schedule 2,594 Views 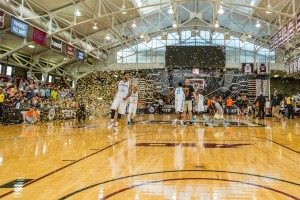 The Basketball Tournament (TBT) presented by Jack Link’s® Protein Snacks and ESPN today announced the broadcast schedule for the 2016 $2 million single elimination winner-take-all event, the most comprehensive in the event’s three year history.

“Our event continues to grow in stature and awareness, and we are again pleased to have ESPN along in an ever-expanding role to help us bring even more of our event to such a wide audience,” said Jon Mugar, TBT Founder. “We are experiencing exponential digital growth thus far in 2016 and anticipate a shockingly high level of play this summer. We strive to put on the highest stakes basketball product in the world, and I’d be surprised if our primetime championship game August 2 doesn’t get us all the way there.”

“ESPN is proud to continue its association with The Basketball Tournament, a unique concept and a high-caliber event with a proven track record,’ said Dan Ochs, ESPN, director of content strategy and acquisitions. “As TBT doubles its prize money this year, we look forward to expanding our coverage of the event with 11 televised games, including the championship in primetime on ESPN.”

The streaming schedule for the remaining games, as well as broadcast talent, will be announced shortly.

TheTournament.com serves as the host for TBT’s social media driven application period, which runs from April 1 to June 1, 2016. The field will be made of 64 teams who will play in four regions of 16 apiece. The top vote getters in each region will receive “automatic” bids and one team per region will automatically qualify by raising the most money for Big Brothers Big Sisters of America. TBT will select up to 3 at-large teams per region, with the regional champions from 2015 completing the field. Teams can qualify for TBT 2016 only by getting votes from fans that register on the site, with the top 100 fans of the winning team splitting $200,000 (10 percent of the total prize).

TBT’s 2015 field included hundreds of players who have competed at the highest levels all over the world. Overseas Elite, a team of veteran international professional players, won last year’s $1 million winner-take-all title at the historic Rose Hill Gymnasium. Fans who voted for Overseas Elite shared in the winnings, taking home a combined $50,000 of the grand prize. The Notre Dame Fighting Alumni, a squad made up of some of the best players in University of Notre Dame history, won the inaugural title and $500,000 in 2014. Over 300 teams applied to join the tournament last year, which saw the winner-take-all prize double in value.

Players must be 18 years of age or older and all games are played under college rules with two 18-minute halves. In addition to Overseas Elite, university-based alumni teams representing schools like Syracuse University, Notre Dame, Princeton, Villanova, Virginia and others have competed in TBT’s previous editions, with more likely to join them in this and future years.

Jerry Milani is a freelance writer and public relations executive living in Bloomfield, N.J. He has worked in P.R. for more than 30 years in college and conference sports media relations, two agencies and for the International Fight League, a team-based mixed martial arts league, and now is the PR manager for FAN EXPO, which runs pop culture and celebrity conventions across North America. Milani is also the play-by-play announcer for Caldwell University football and basketball broadcasts. He is a proud graduate of Fordham University and when not attending a Yankees, Rams or Cougars game can be reached at Jerry (at) JerryMilani (dot) com.
@gbpackjerry
Previous 710 WOR Will Re-Broadcast 1986 World Series Game 6 On Thursday
Next Topps 2016 Archives Set To Release “Bull Durham” Commemorative Cards on June 1