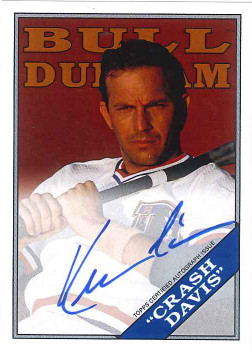 Topps “Archives Baseball” product which celebrates Topps’ history showcasing designs from past years will honor the characters of the legendary film “Bull Durham” when the product is released on June 1, it was officially announced today.

The seven card insert will include images of the biggest names in the film, which was released originally in June of 1988. It includes signed cards By Kevin Costner and Susan Sarandon, as well as images of actor Robert Wuhl and Tim Robbins. All the information will be located on Topps.com and images for media are available on request.

This year’s base set includes designs from 1953, 1979, and 1991. There’s also a nod to other years such as 1984, 1985 and 1986. Last year’s release included a 10-card set of Will Ferrell featuring him on 10 different teams. In Spring Training in 2015, he played with nine teams (was a coach on another) in an effort to raise money for charity. In 2014, Topps included inserts of stars from the movie, “Major League,” including Charlie Sheen, Corbin Bernsen, Tom Berenger, Margaret Whitton and others.

Jerry Milani is a freelance writer and public relations executive living in Bloomfield, N.J. He has worked in P.R. for more than 30 years in college and conference sports media relations, two agencies and for the International Fight League, a team-based mixed martial arts league, and now is the PR manager for FAN EXPO, which runs pop culture and celebrity conventions across North America. Milani is also the play-by-play announcer for Caldwell University football and basketball broadcasts. He is a proud graduate of Fordham University and when not attending a Yankees, Rams or Cougars game can be reached at Jerry (at) JerryMilani (dot) com.
@gbpackjerry
Previous The Basketball Tournament presented by Jack Link’s® Protein Snacks And ESPN Announce Expanded 2016 Coverage Schedule
Next Olympian and UFC champion Daniel Cormier named Honorary Chairman of Wrestling World Cup in Los Angeles, June 11-12