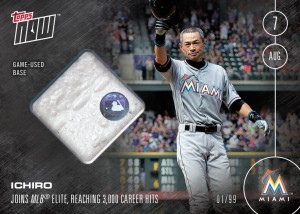 Baseball fans have craved ways to commemorate the biggest and brightest moments of this year’s exciting MLB season and Topps NOW™ physical baseball cards continue to offer a unique collectible to celebrate those moments every day. The Topps NOW cards, available for only 24 hours exclusively on Topps.com and then never offered again, captured those many moments throughout the season for baseball fans as the on-demand trading card program reached an incredible milestone with 1 million cards sold.

“Topps NOW has been a truly innovative program that Topps was thrilled to bring to sports fans and collectors first,” said David Leiner, General Manager and Vice President of North American Sports & Entertainment at Topps. “The program resonated with baseball fans because it helped bring them closer to a sport they are truly passionate about. Whether it’s a walk-off win, an amazing home run-robbing catch or a great milestone, fans know they can count on Topps NOW to capture those moments almost immediately.”

However, Judge’s Topps NOW cards aren’t simply about breaking records. Topps NOW has given baseball fans a different way to chronicle what has turned into an incredible soon-to-be award-winning season.

“Judge has really grabbed the attention of baseball fans everywhere,” Leiner said. “His Topps NOW cards have been some of the most popular in the program from his debut in 2016 to winning the 2017 Home Run Derby to breaking the rookie record. What better way to commemorate such an incredible season than with Topps NOW chronicling the way.”

Jerry Milani is a freelance writer and public relations executive living in Bloomfield, N.J. He has worked in P.R. for more than 30 years in college and conference sports media relations, two agencies and for the International Fight League, a team-based mixed martial arts league, and now is the PR manager for FAN EXPO, which runs pop culture and celebrity conventions across North America. Milani is also the play-by-play announcer for Caldwell University football and basketball broadcasts. He is a proud graduate of Fordham University and when not attending a Yankees, Rams or Cougars game can be reached at Jerry (at) JerryMilani (dot) com.
@gbpackjerry
Previous Motorsports Documentary ‘Dust 2 Glory’ Speeds into Movie Theaters Nationwide December 6
Next YouTube TV & Major League Baseball: A multi-faceted 2017 World Series partnership