Home / News / As Olympics Approach, Who Are The Athetes Engaging The Best?

As Olympics Approach, Who Are The Athetes Engaging The Best?

Jerry Milani November 2, 2017 News Comments Off on As Olympics Approach, Who Are The Athetes Engaging The Best? 2,975 Views

We are now LESS than 100 Days to the start of the Winter Olympics, so it is interesting to see as brands engage who are the athletes who are making the difference in their social space. Some casual fans are bemoaning the lack of NHL stars at the Games, but the Winter Games for Team USA (Feb. 9-25) will be about new faces, especially women, who have grasped the social space and can show ROI to their communities.

opendorse — the innovative social media management platform created by athletes, for athletes — took a look at those going to the Games, and broke down the best who are engaging in social…and some may surprise you now, but may not when they make it to the podium, as they are setting the stage for brand and Olympic success not just on the ice or the snow, but in the boardroom.

opendorse has ranked the top winter Olympians (who have more than 25K Twitter followers) by highest engagement rate and half of the top ten are women, including rising hockey stars Amanda Kessel and Hilary Knight. The list also includes a good amount of those who also don blades, albeit for figure and speed skating, and includes Jason Brown, Adam Rippon and Maia Shibitani. All of them are well engaged and ready for success when the bright lights of the world turn closely to them in just a short period of time. 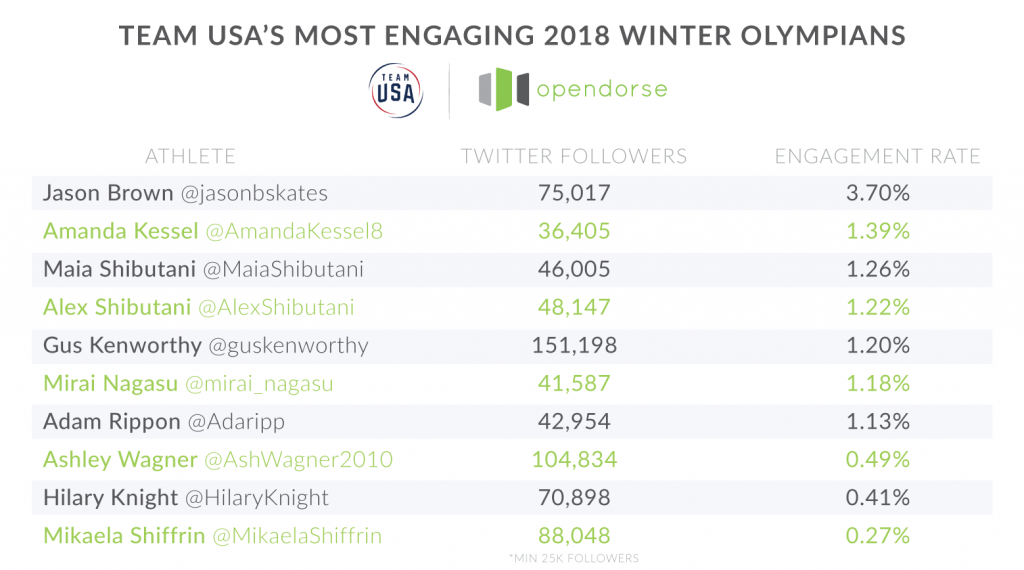 “As we’re going into the winter Olympics season, we’ve been having some great conversations with brands, teams and leagues about how to leverage the power of Olympic athletes on social media. We’re inspired by the diversity and high fan engagement of Team USA’s most engaging 2018 winter Olympians on Twitter, and we look forward to helping advertisers easily distribute original, curated and paid content directly through the social media channels of Olympians,” said opendorse CEO Blake Lawrence.

Why is such engagement important for brand marketers to see as they make decisions? “The Olympics have always been a bit of a challenge as you try and find the right people to tie into, and the Winter Olympics are usually more of a question mark than the summer games,” added Chris Lencheski, a Columbia professor and veteran sports marketer now at MP & Silva. “Data like this really crystallizes who and where a brand can make the right engagement, and probably cuts the time in making decisions, informed decisions on who to partner with, down pretty quickly. It really is invaluable, and is an eye opener when you see how engaged some athletes, especially female athletes, are with their communities.”

As we head toward the Olympics, new stories are about to be born. No we have another great tool to look ahead and see who may be driving the conversation, and that will be invaluable to the business of sport once again.

Jerry Milani is a freelance writer and public relations executive living in Bloomfield, N.J. He has worked in P.R. for more than 30 years in college and conference sports media relations, two agencies and for the International Fight League, a team-based mixed martial arts league, and now is the PR manager for FAN EXPO, which runs pop culture and celebrity conventions across North America. Milani is also the play-by-play announcer for Caldwell University football and basketball broadcasts. He is a proud graduate of Fordham University and when not attending a Yankees, Rams or Cougars game can be reached at Jerry (at) JerryMilani (dot) com.
@gbpackjerry
Previous RIDE TV Gallops On To Sling TV
Next P&G Launches New Olympic Games Film: ‘Love Over Bias’