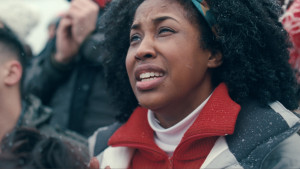 Marking 100 days until the Opening Ceremony of the Olympic Winter Games PyeongChang 2018, Procter & Gamble (NYSE: PG), a Worldwide Olympic Partner today unveiled “Love Over Bias,” the newest installment of its award-winning “Thank You, Mom” campaign. The film imagines what the world could be if we all saw each other through a mom’s eyes.

The critically acclaimed short films from P&G’s previous Olympic Games campaigns are among the most viewed Olympic Games videos of all time. ‘Love Over Bias’ reflects stories of real athlete challenges through their moms’ eyes, and honors the spirit of The Olympics themselves, which inspires the world to look beyond the things that divide us to celebrate the things that all people share. Because all those who have struggled with prejudices and preconceived notions have a powerful ally, one who has been by their side from the beginning, championing them against all odds…their mom.

The six vignettes featured in the film reflect the struggles with bias that real athletes encounter are as varied as the sports they compete in:

The film celebrates a mom’s role as her child’s first and greatest advocate, the one who sees her child’s potential regardless of how others see them. The hope is that this film will help bring people together to talk openly about bias, its role in limiting human potential and the need to see beyond the things that divide us to the common things that can bring us together. To view the short film, please visit: https://youtu.be/JSWyrR4gXkw

Athletes around the globe agree that the lifelong journey to The Olympics can be littered with obstacles that stem from biases about what an athlete looks like, prejudices about who they love or how they worship. A recent survey distributed to Olympians by the IOC on behalf of P&G found that:

P&G has taken inspiration from athletes whose athletic journey and personal stories closely reflect the campaign:

“The ‘Love Over Bias’ film really hit home for me having lived through the fears and uncertainty of coming out and how I’d be judged,” said Kenworthy. “My mom’s unconditional love and support helped me rise above what others might think and gave me the courage to truly own who I am as I pursue my dreams.”

The campaign is part of a company wide effort to use the power of advertising to spark conversations about important matters such as bias. This has been a longstanding journey for P&G, which includes other campaigns that promote conversations about a broad range of topics like gender bias in Ariel Share the Load, Always Like a Girl, SK-II Marriage Market Takeover Secret’s Ladies’ Room Stress Test and We See Equal; about racial bias in The Talk and sexual orientation in Vicks Touch of Care.

“At P&G, we aspire to create a better world for everyone — a world free from bias, with equal representation, equal voices and equal opportunity,” said Marc Pritchard, P&G Chief Brand Officer. “When the world is more equal, society is better and it leads to economic growth. Unfortunately equality is limited by biases, and we recognize we can use our voice to be a force for good and shine a light on the bias that limits human potential. We hope to promote open discussion, influence attitudes, and ideally change behavior.”

“Love Over Bias” was directed by Alma Har’el, whose work includes award-winning films Bombay Beach and LoveTrue. The film, which features music by singer/songwriter MILCK, will appear in full form digitally as a 93-second video or in short form on television in more than 20 countries. P&G will also be creating and sharing additional films highlighting the personal journeys of several Olympic athletes, including Kenworthy and Meyers Taylor.

Share #LoveOverBias and go to www.LoveOverBias.com to learn more about these and other athletes.

Jerry Milani is a freelance writer and public relations executive living in Bloomfield, N.J. He has worked in P.R. for more than 30 years in college and conference sports media relations, two agencies and for the International Fight League, a team-based mixed martial arts league, and now is the PR manager for FAN EXPO, which runs pop culture and celebrity conventions across North America. Milani is also the play-by-play announcer for Caldwell University football and basketball broadcasts. He is a proud graduate of Fordham University and when not attending a Yankees, Rams or Cougars game can be reached at Jerry (at) JerryMilani (dot) com.
@gbpackjerry
Previous As Olympics Approach, Who Are The Athetes Engaging The Best?
Next MLB Network’s Offseason Coverage Begins Today