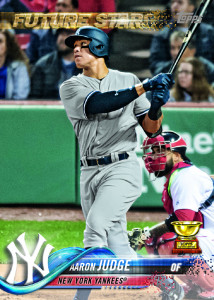 New York Yankees star Aaron Judge continues to earn accolades as the reigning American League Rookie of the Year was voted to be Card No. 1 in 2018 Topps® Baseball Series 1 by thousands of fans as revealed exclusively on MLB Network today.

Baseball fans can get the newest Topps Judge card when the Major League Baseball season kicks off with 2018 Topps Baseball Series 1 hitting the stores on January 31. They can also find rookie cards, autograph cards of their favorite players, and an interactive sweepstakes that will last all baseball season with Home Run Challenge.

“Aaron Judge transcended baseball during his record-breaking rookie season,” said David Leiner, Topps Global General Manager. “Fans from across the league were excited to see him play so it comes as no surprise they voted for him to be Card No. 1 for this year’s set. We are thrilled to add him to the list of great players that have been featured on the first card of the year.”

Judge joins players such as Jackie Robinson, Ted Williams, Mike Piazza and Derek Jeter as those who have claimed Card No. 1. Mike Trout and Kris Bryant were voted to the top spot the last two seasons, respectively, through an online vote.

Topps, the exclusive trading card partner of Major League Baseball, provides an experience unlike any other. Baseball fans and collectors can’t replicate the fun they have when opening a pack of cards.

Collecting and trading baseball cards has become a hobby that crosses generations with longtime collectors and newcomers alike getting in on the action.

“Collecting baseball cards is a great family activity from the moment you open a pack to getting your favorite player and then putting them in a binder,” Leiner said. “Baseball cards resonate with fans, which you see at the ballpark with fans asking players to sign their Topps cards or in stores where people get together to share in a special hobby.”

Jerry Milani is a freelance writer and public relations executive living in Bloomfield, N.J. He has worked in P.R. for more than 30 years in college and conference sports media relations, two agencies and for the International Fight League, a team-based mixed martial arts league, and now is the PR manager for FAN EXPO, which runs pop culture and celebrity conventions across North America. Milani is also the play-by-play announcer for Caldwell University football and basketball broadcasts. He is a proud graduate of Fordham University and when not attending a Yankees, Rams or Cougars game can be reached at Jerry (at) JerryMilani (dot) com.
@gbpackjerry
Previous ‘The Fred Couples Show’ Returns to SiriusXM PGA TOUR Radio
Next Professional Fighters League Reaches Exclusive Multi-Platform Distribution Agreements with NBC Sports Group and Facebook