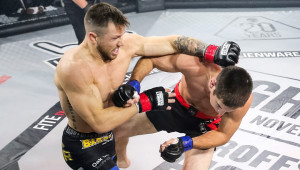 The Professional Fighters League (PFL), the world’s only major mixed martial arts league, has reached exclusive multi-platform distribution agreements for 2018 with NBC Sports Group and Facebook. The new deal will allow approximately 300 million MMA fans worldwide to watch every PFL fight live on television, tablets, smart phones, and other connected devices. In addition, the PFL has named Peter Murray as its Chief Executive Officer. Murray had previously held senior executive positions at Under Armour and the National Football League.

The Professional Fighters League is the first organization ever to present MMA as a true sport that features a regular season, playoffs, and championship. Individual fighters will control their own destiny, competing in a win-and-advance postseason format. The 2018 PFL season consists of seven regular-season events, a bracket-style playoff, and a $10 million postseason prize pool. The premiere season begins with 72 athletes, 12 in each of the six different weight-classes, with one fighter in each division earning the title of true champion.

“Today is an enormous step forward for the PFL and our mission of re-imagining and growing the sport of MMA,” said Russ Ramsey, Executive Chairman of the Professional Fighters League. “We’re thrilled to offer broad distribution for our first season, with great media partners in NBC Sports Network and Facebook. Pete Murray is an accomplished marketer and builder in sports and media, making him the ideal leader to deliver the innovative experience to MMA fans and build the PFL brand.”

All PFL regular season, playoff, and championships fights will be available to watch and stream worldwide.

Within the United States, NBC Sports Group will establish an exclusive live Thursday night PFL fight franchise, presenting seven regular-season live events in prime time exclusively on NBCSN beginning June 7 through the end of August. Events televised by NBCSN will also stream on NBCSports.com and the NBC Sports app. All regular season events will have encore telecasts on NBCSN later the same night.

“We are excited to create a Thursday night destination that will be appointment viewing for MMA fans,” said Jon Miller, President, Programming, NBC Sports Group. “NBCSN, NBCSports.com, and the NBC Sports app will be home to the PFL’s innovative format, which will keep viewers on the edge of their seats from the first fight June 7 through the championship finale December 31. We look forward to working with Pete and the PFL team on what promises to be a thrilling season.”

“We’re excited for Facebook Watch to be a home for the Professional Fighters League’s inaugural season,” said Dan Reed, Facebook Head of Global Sports Partnerships. “The PFL’s comprehensive coverage on Watch, combined with its plans to deliver an innovative viewing experience, will give MMA fans ample opportunity to come together, talk about, and interact with this exciting new league in ways that are unique to our social video platform.”

The PFL postseason will be held in October on consecutive Saturday nights, with an exciting win-or-go-home elimination format. The season-ending PFL Championship promises to be one of the most talked about nights in sports, with championship fights for each of the six weight classes in one night on New Year’s Eve in prime time. Before the ball drops, six MMA athletes will have each earned $1,000,000 in prize money and be crowned true champions.

“I am thrilled to work with partners NBC Sports Group and Facebook as we launch the PFL with the format fans love in all other major sports — with a regular season, win-or-go-home playoffs, and $10 million championship,” said Pete Murray, Chief Executive Officer of the Professional Fighters League. “MMA fighters are the greatest athletes in the world, and the PFL is excited to provide them an opportunity to control their destiny, and have the opportunity to earn the biggest payday of their lives.”

Peter Murray previously was a senior executive at Under Armour, where he was responsible for global marketing strategy and the sports business categories of Basketball, Global Football, Baseball, Tennis, Rugby, Combat, and Olympics. Before Under Armour, Murray co-founded and served as President and CEO of Insignia Sports and Entertainment, an innovative sports marketing and content development firm, and was also head of Client Marketing at William Morris Endeavor. Earlier in his career, Murray spent 13 years at the National Football League (NFL) in senior leadership roles in marketing, content creation, sponsorship, and business development.

Jerry Milani is a freelance writer and public relations executive living in Bloomfield, N.J. He has worked in P.R. for more than 30 years in college and conference sports media relations, two agencies and for the International Fight League, a team-based mixed martial arts league, and now is the PR manager for FAN EXPO, which runs pop culture and celebrity conventions across North America. Milani is also the play-by-play announcer for Caldwell University football and basketball broadcasts. He is a proud graduate of Fordham University and when not attending a Yankees, Rams or Cougars game can be reached at Jerry (at) JerryMilani (dot) com.
@gbpackjerry
Previous Judge Named Topps Card No. 1 for 2018
Next NBC Olympics To Present 94 Hours Of Paralympic TV Coverage In March, Nearly Doubling Sochi