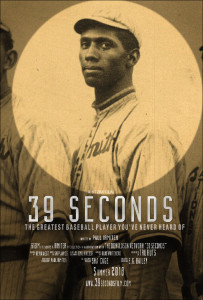 As we reported here back in December, a team of filmmakers is working on a film, 39 Seconds, about the legacy of John Donaldson, early 20th century baseball star whose influence has largely been forgotten.

Today, on the 127th anniversary of Donaldson’s birth, the group is launching a Kickstarter campaign, seeking support to make this documentary to restore the legacy of the lefty once known as “The Greatest Colored Pitcher in the World.”

The “39 Seconds” in the title refers to the length of a clip that constitutes the only known video footage of Donaldson pitching.

“39 Seconds is the life story of the greatest baseball player you’ve never heard of,” said director Paul Irmiter in the trailer accompanying the Kickstarter entry. “He was as famous as you could get as a ballplayer. He went from town to town and has his fame grew, a small town of 500 would have 5,000 people show up on a Sunday afternoon to watch this lefthanded pitcher mow down every batter that faced him.

“The reasons why he had to play in the middle of nowhere essentially is a lot about what the film is about. He was always the headliner. He was the draw.”

Fans can learn more and support the project here.

Jerry Milani is a freelance writer and public relations executive living in Bloomfield, N.J. He has worked in P.R. for more than 30 years in college and conference sports media relations, two agencies and for the International Fight League, a team-based mixed martial arts league, and now is the PR manager for FAN EXPO, which runs pop culture and celebrity conventions across North America. Milani is also the play-by-play announcer for Caldwell University football and basketball broadcasts. He is a proud graduate of Fordham University and when not attending a Yankees, Rams or Cougars game can be reached at Jerry (at) JerryMilani (dot) com.
@gbpackjerry
Previous MLB Net ’30 Clubs In 30 Days’ Begins Thursday
Next CBS Sports Radio Channel to Debut on SiriusXM Wednesday