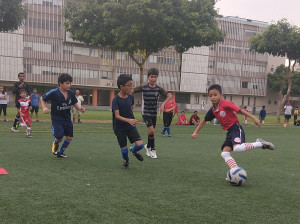 It’s almost every child’s dream, from when they start kicking the ball – to see themselves featured on the screen when scoring an incredible goal or displaying their best skills, just like their heroes in the biggest competitions.

This dream is about to be very real for the kids playing in Delhi, India, as mycujoo and Football Delhi (Delhi Soccer Association) have entered into a four year agreement for the live streaming of football competitions and events, starting with the 2018-19 season.

“We are excited to sign this historic partnership with mycujoo as their mission is to bring digital technology to the long tail, to grassroots football”, said Shaji Prabhakaran, President Football Delhi (DSA) . “With this agreement, we will jointly empower thousands of players in Delhi, India to enter the digital world through their playing experience. Grassroots football in Delhi will never be the same again.”

The agreement is planned to deliver the exclusive live streaming of 2,200 matches over its full duration.

“One of the highlights of this agreement is the Pro League, but for us it is as important if not more to be streaming matches from the Women’s league, grassroots tournaments, community football events and leagues for both boys and girls”, said Pedro Presa, CEO of mycujoo. “We want to empower players, leagues and federations to create this exciting experience of live streaming, highlights creation and sharing, forming the digital community of the Delhi Soccer Association.”

The first matches to live stream are planned to take place in September 2018 for the Delhi A & B Divisions, School Leagues and Golden League.

Jerry Milani is a freelance writer and public relations executive living in Bloomfield, N.J. He has worked in P.R. for more than 30 years in college and conference sports media relations, two agencies and for the International Fight League, a team-based mixed martial arts league, and now is the PR manager for FAN EXPO, which runs pop culture and celebrity conventions across North America. Milani is also the play-by-play announcer for Caldwell University football and basketball broadcasts. He is a proud graduate of Fordham University and when not attending a Yankees, Rams or Cougars game can be reached at Jerry (at) JerryMilani (dot) com.
@gbpackjerry
Previous It Takes ‘TeamWorks’ To Tell Great Stories…
Next AT&T AUDIENCE Network Adds ‘Undeniable with Dan Patrick’