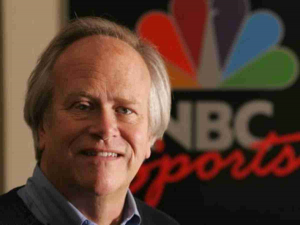 If you were looking for leaders in sports, media and entertainment the list could start with three pretty prominent names: Dick Ebersol, Donna DeVarona and Dr. Harvey Schiller. The trio have been prominent movers and shakers and have touched probably millions of lives and helped shaped not just careers, but public opinion for decades. This morning, the three penned a prominent statement of tribute to someone who effected their own prominent lives of service and business, the late Senator John McCain.

It is a great summation of how many in all of those fields feel about the life well lived.

A statement of tribute to Senator John McCain

“In the thoughts of millions in our nation, Senator John McCain will be remembered for serving our nation in countless ways.

Among them was his unwavering support of America’s Olympic athletes and the United States Olympic Committee.

He was a protector of Olympic principles and held those in Olympic leadership positions to the highest standard of conduct and performance.

His leadership of the Senate Commerce Committee with Senators Ted Stevens and Ben Campbell resulted in historical, aggressive legislation and improvements within the USOC and how it created opportunities to support and care for our athletes.

Our nation’s Olympic and Paralympic athletes have lost a keeper of the flame who kept their own struggles and achievements close to his heart.

John McCain knew what it was to be a champion and he himself was a gold medalist in uncounted examples of a life of service and commitment.”

With respect, honor and gratitude,

Jerry Milani is a freelance writer and public relations executive living in Bloomfield, N.J. He has worked in P.R. for more than 30 years in college and conference sports media relations, two agencies and for the International Fight League, a team-based mixed martial arts league, and now is the PR manager for FAN EXPO, which runs pop culture and celebrity conventions across North America. Milani is also the play-by-play announcer for Caldwell University football and basketball broadcasts. He is a proud graduate of Fordham University and when not attending a Yankees, Rams or Cougars game can be reached at Jerry (at) JerryMilani (dot) com.
@gbpackjerry
Previous Sports Business Industry Veteran Walker Looks To Shape Up The National Fitness Foundation
Next U.S. Polo Assn. Creates ‘The Polo Life’ Show