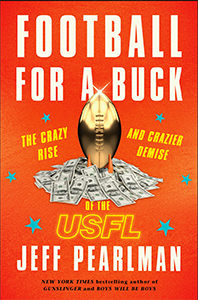 Those of us of a certain age remember the phenomenon that was the USFL. The spring football league operated from 1983 through 1985, before a planned move to the fall and famous pyrrhic victory lawsuit against the NFL (which yielded $1, trebled to $3) snuffed its final embers.

Jeff Pearlman, formerly of Sports Illustrated and author of numerous sports books including Gunslinger and The Bad Guys Won and the famed SI article that exposed John Rocker’s human deficiencies to the world, tells the best of these stories in his recently released labor of love, Football for a Buck: The Crazy Rise and Crazier Demise of the USFL (Houghton Mifflin Harcourt, 384 pps).

We’ll have a full review soon, but in the meantime, Jeff took a few minutes from his extensive media blitz to answer a few questions to whet our appetite for the rest of the book. Edited not one bit for content 😉

SportsMedia Report: There are dozens of websites, twitter accounts, etc. dedicated to the USFL. What makes it so enduring for a league that lasted 3 years, 35 years ago?

Jeff Pearlman: Honestly, I don’t think it is THAT enduring. I mean, there are websites for shitty TV shows, mediocre athletes, even (on occasion) journalists. So I don’t think the world clamors for the USFL. However, I clamored for it, and I desperately want people to appreciate it the way I did. The cool uniforms, the sick helmets, the superstars, the drunken flights, a guy slamming his penis in a trunk. There’s so much crazy joy, it’s worth remembering. And celebrating.

SMR: What would you consider as the USFL’s big “arrival” moment: Herschel Walker signing? Jim Kelly? Something else?

JP: Oh, the signing of Herschel screamed, “We’re the USFL!” It also had the NFL screaming, “What the fuck is going on here?!” Hard to imagine now, the hugeness of it all, but this would be the equivalent of, oh, Cam Newton coming out of college and going to the XFL instead of the NFL—times 100,000. Walker was simply an iconic college player at a time when icons lasted more than the cycle of a Tweet. It was an earthquake for sports. 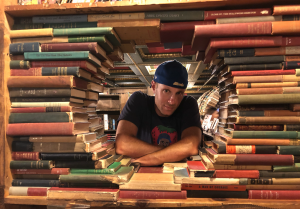 SMR: What would have needed to happen for the league to be able to succeed in the fall up against the NFL?

JP: Every NFL player, owner and executive would have had to simultaneously stepped into a giant black hole that engulfed them into an eternity of 17-galaxies-away space/time travel. Put different: Fall could not have worked.

SMR: Where would you rate the swap of the Arizona and Chicago franchises in the pantheon of the “most USFL” things the USFL ever did?

SMR: We know from how many players went on to NFL careers that there was plenty of talent in the league, but how well do you think the best USFL teams would have done in the NFL?

JP: Poorly. The best team, the 1984 Philadelphia Stars, probably could have gone 7-9, maybe 8-8. The second best team, the 1983 Michigan Panthers, maybe wins five or six. But depth was a big issue. There were a ton of neon names, but backups were smaller, slower.

SMR: The ESPN 30-for-30 “Small Potatoes” ended up focusing a lot on one owner’s part in the leagues demise. Though you have likened Football for a Buck more to Terry Pluto’s Loose Balls, how much does Donald Trump factor into the book?

JP: A fair amount. I mean, he was then what he is now—a poisonous motherfucker concerned with his own success over all else. Without Trump, the USFL could have survived. Maybe.

Jerry Milani is a freelance writer and public relations executive living in Bloomfield, N.J. He has worked in P.R. for more than 30 years in college and conference sports media relations, two agencies and for the International Fight League, a team-based mixed martial arts league, and now is the PR manager for FAN EXPO, which runs pop culture and celebrity conventions across North America. Milani is also the play-by-play announcer for Caldwell University football and basketball broadcasts. He is a proud graduate of Fordham University and when not attending a Yankees, Rams or Cougars game can be reached at Jerry (at) JerryMilani (dot) com.
@gbpackjerry
Previous Phil Jackson as … Superman?
Next Opendorse, PGA TOUR To Help Players, Partners With Social Media Reach