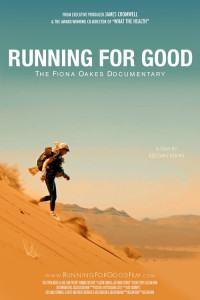 From Executive Producer James Cromwell and award-winning director Keegan Kuhn (What The Health, Cowspiracy) comes the full-length documentary about ultra-marathoner Fiona Oakes—Running For Good. Narrated by best-selling author, ultra-athlete Rich Roll, and told through a series of intimate conversations and gut-wrenching footage from locations such as the Sahara Desert, the North Pole and Antarctica, Fiona’s grit and determination astonishes and inspires.

Oakes is best known for being the fastest woman in the world to run a marathon on all seven continents. She holds three marathon world records and five course records. But Fiona is no ordinary runner, she has accomplished these feats despite losing a knee cap to a debilitating medical condition in her teens. “At the age of 14,” Fiona explains, “my doctors told me and my mum that I may never walk properly again.” Undeterred and displaying an unequaled sense of courage, Fiona took to the ultramarathon circuit. The film culminates in chronicling her entry into what is considered to be the toughest footrace on Earth, the Marathon Des Sables.

The race, known to runners as the MDS, is the apex of the ultramarathon circuit. The 6-day endurance test stretches 250 km (the equivalent of nearly six individual marathons) through the Sahara Desert. In one stage, runners are sent up and down three individual mountains, a formidable challenge for any ultramarathoner, tortuous for a runner with Fiona’s condition. In Running For Good, the viewer is given a front row seat to experience the grueling toll the Saharan landscape’s changes in terrain take on Fiona’s body and her overall health.

“Fiona is a truly remarkable athlete and human being. She has defied all odds to become a world record-breaking runner despite a horrific injury. Her sense of purpose is so strong that nothing can stop her. Yet at the same time she is one of the most humble and selfless people I have met” said Elisabet Barnes, 2-time winner of the MDS.

Fiercely driven by her love for animals, Fiona’s story punctuates the beauty and strength of the human spirit. “I was deeply moved by this awe-inspiring story of how a woman has overcome a disability that would put most people in a wheelchair, to become a world record breaking ultra-marathon runner, fueled by a plant-based diet.” states best-selling author, John Robbins.

Running For Good is now available for public screening events and debuts to the public October 11, 2018 on Vimeo. To download the film, click here.

Jerry Milani is a freelance writer and public relations executive living in Bloomfield, N.J. He has worked in P.R. for more than 30 years in college and conference sports media relations, two agencies and for the International Fight League, a team-based mixed martial arts league, and now is the PR manager for FAN EXPO, which runs pop culture and celebrity conventions across North America. Milani is also the play-by-play announcer for Caldwell University football and basketball broadcasts. He is a proud graduate of Fordham University and when not attending a Yankees, Rams or Cougars game can be reached at Jerry (at) JerryMilani (dot) com.
@gbpackjerry
Previous San Francisco Baseball History To Be Digitized
Next ‘F2 Finding Football’ Nominated for 2018 Streamy