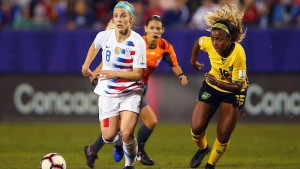 “As the leader in live sports, FOX Sports will be bringing fans the seminal event of the summer – Team USA’s attempt to become back-to-back FIFA Women’s World Cup champions,” said David Katz, EVP, Digital for FOX Sports. “After an amazing 2018 World Cup with Twitter that exceeded expectations, we are thrilled to expand our partnership to bring soccer fans closer to the storylines and personalities that will captivate them.”

“We are excited to partner again with FOX Sports to bring the very best premium content from the FIFA Women’s World Cup France 2019 and the US Women’s National Team to Twitter alongside the passionate soccer conversation,” said Kay Madati, VP and Global Head of Content Partnerships at Twitter. “After last summer’s successful Twitter/FOX Sports programming collaboration, this expanded effort will bring our engaged audience even closer to the action and top stories from this seminal event in France.”

Jerry Milani is a freelance writer and public relations executive living in Bloomfield, N.J. He has worked in P.R. for more than 30 years in college and conference sports media relations, two agencies and for the International Fight League, a team-based mixed martial arts league, and now is the PR manager for FAN EXPO, which runs pop culture and celebrity conventions across North America. Milani is also the play-by-play announcer for Caldwell University football and basketball broadcasts. He is a proud graduate of Fordham University and when not attending a Yankees, Rams or Cougars game can be reached at Jerry (at) JerryMilani (dot) com.
@gbpackjerry
Previous mycujoo, FIH To Launch “FIH.live” Global Platform For Hockey
Next SheIS Challenge Targets Women’s Sports Fans