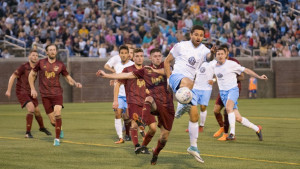 Chattanooga Football Club, a growing, disruptive and innovative established club in the National Premier Soccer League (NPSL) today announced that they have exceeded the $500,000 dollar mark in the sale of limited public stock in the club in the first 30 days of the offering. They are the first American sports team to do so since the securities reform laws passed in late 2016 allowed such investments. Proceeds from the limited offering of 8,000 shares will support the club’s move from amateur to professional players and year-round operation.

“We remain impressed and overwhelmed with the breadth and scope of this project means not just for Chattanooga FC, but for community sports clubs in America in general,” said said Tim Kelly, club chairman. “We have not done this frivolously or in a vacuum; this is an investment in a soccer club with solid business and community ties and a vision for success on and off the pitch, and we know that is key in trying and succeeding to this point. The ROI on this investment, big or small, is in the people and the community. We are nowhere done, but we are proving the concept works, and that’s very exciting.”

While a majority of the investment is local (within the Chattanooga metro area), a significant amount (44% of the people, 37% of the dollars) are from beyond that area. That includes investment from over 44 states and 10 countries, as far away as Japan, Australia and Africa.  Some of the bolder face names to come public with investing are former MLS star and current NBC Sports Premier League commentator Kyle Martino and Stephan Szymanski, author of Soccernomics and Money in Soccer, and a highly respected professor at the University of Michigan.

Founded in 2009, Chattanooga Football Club has drawn nearly 350,000 fans to its games at Finley Stadium over the course of the last ten seasons. In 2019, the club will play an extended season with professional players in the NPSL Founders Cup, and fully launch the league in 2020.

With the passage of the Jobs Acts in late 2016, Section CF crowdfunding allows non-accredited investors to make investments in corporations from a simple, online platform. Chattanooga Football Club is the first sports team to offer shares, and one of only a handful of teams to ever offer public ownership. While the practice is common in the rest of the world- even mandatory in the German Bundesliga- it is rare in the US. Cutting Edge Capital, a strategic capital consulting company has advised on the process.

Fans and interested investors can go to wefunder.com/chattanoogafc for full details on the stock offering.

Jerry Milani is a freelance writer and public relations executive living in Bloomfield, N.J. He has worked in P.R. for more than 30 years in college and conference sports media relations, two agencies and for the International Fight League, a team-based mixed martial arts league, and now is the PR manager for FAN EXPO, which runs pop culture and celebrity conventions across North America. Milani is also the play-by-play announcer for Caldwell University football and basketball broadcasts. He is a proud graduate of Fordham University and when not attending a Yankees, Rams or Cougars game can be reached at Jerry (at) JerryMilani (dot) com.
@gbpackjerry
Previous Hall of Famer Smoltz Adds American Century Championship To Golf Schedule, Airing On NBC
Next ESPN and ESPN+ to Become PFL Exclusive U.S. Media Home