A Land Shaped by Women is an inspirational film documenting the unique journey of world champion snowboarders Anne-Flore Marxer and Aline Bock, who leave their life of competition to explore Iceland, a country ranked first in gender equality by the United Nations for nine years in a row. Directed by Marxer in her directing debut, A Land Shaped by Women has been recognized 13 times by film festivals around the globe for its powerful yet positive message about gender equality and is available on demand here beginning today.

The film follows Marxer and Bock as they travel Iceland by van and explore the country through their beloved adventure sports, snowboarding and surfing, respectively. As their travels unfold, the duo experience breathtaking mountain terrain, waves and the famous Northern Lights, where viewers are introduced to iconic and influential Icelandic women they meet along the way. For Marxer, this was especially poignant, as she has spent the last 15 years unapologetically fighting for equal opportunities and gender parity in a male-dominated snowboarding industry, which has ultimately resulted in equal prize money in freestyle competitions and has brought women back on the Freeride World Tour. 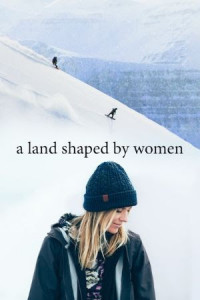 “I grew tired of constantly having to fight and justify being a woman in snowboarding and was in need of inspiration and strength. So, the day after winning the biggest competition of the season, I decided to go to Iceland as I heard it was on the forefront of gender equality – I wanted to see it for myself,” said Marxer. “It is so exciting to see the emotions this film has evoked all over the world in not only women but men as well. I love that it brings a feminine narrative to the outdoor practice, and encourages all of us to be part of creating the world we want to live in.”

Along the journey, Marxer interviews several women who take a strong stance on the female spirit, not asking politely but cementing gender equality as the norm that should have been a long time ago, including Katrin Oddsdottir (human rights attorney who took part in writing Iceland’s new constitution), Heida Birgisdóttir (Nikita clothing founder, documented as one of Iceland’s first female snowboarders and first female surfer), Vilborg Arna Gissurardóttir (explorer, the first Icelander to reach the summit of Mount Everest), Cristina Cretu and Elísabet Rut Rúnarsdóttir (young Icelandic, high school students) and Una Torfadottir (poet, activist).

The film is sponsored by Sunlight, Vaude, Thule, Alpina, Blue Tomato and Thermopad and is available via iTunes, Amazon, Google Play, Xbox, FandangoNow, Playstation, Vimeo on Demand and VUDU.

Jerry Milani is a freelance writer and public relations executive living in Bloomfield, N.J. He has worked in P.R. for more than 30 years in college and conference sports media relations, two agencies and for the International Fight League, a team-based mixed martial arts league, and now is the PR manager for FAN EXPO, which runs pop culture and celebrity conventions across North America. Milani is also the play-by-play announcer for Caldwell University football and basketball broadcasts. He is a proud graduate of Fordham University and when not attending a Yankees, Rams or Cougars game can be reached at Jerry (at) JerryMilani (dot) com.
@gbpackjerry
Previous Sports Broadcaster Siera Santos Joins La Vida Baseball
Next Combate Americas Signs Spanish MMA World Champion Daniel Barez