Jerry Milani June 3, 2019 News, On The Air Comments Off on NBA Finalist Warriors, Raptors Top Thuuz Sports Most Exciting Rankings For May 1,027 Views

Thuuz Sports, the most powerful automated video highlights production platform for worldwide sports, today announced their May Top 10 most exciting games, with the NBA taking most of the attention of fans around the country. Topping the list was the Portland Trailblazers four OT NBA Playoff win over the Denver Nuggets, while both NBA Finalists, The Toronto Raptors and Golden State Warriors logged in with three spots each.

Using their custom designed algorithms to measure real-time event excitement, Thuuz provides a unique look into what games have gotten fans the most excited and engaged as 2019 rolls along. 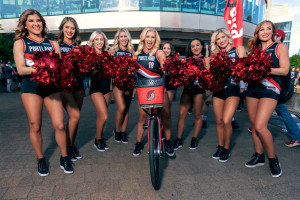 1) Portland 140 Denver 137 (NBA): 5/3 This instant classic went 4 OT’s before the Trail Blazers finally pulled out the win to take a 2-1 series lead. CJ McCollum led the way with 41 points in 60 grueling minutes before the unsung hero, Rodney Hood, stepped up for Portland. Hood scored 7 points in the 4th OT. Although Denver lost, Nikola Jokic was exceptional, playing an almost unbelievable 65 minutes, the 4th most in a game in NBA history. Jokic notched a triple-double, with 33 points, 18 rebounds, and 14 assists.

2) Toronto 118 Milwaukee 112 (NBA): 5/19 With Toronto teetering on the edge of elimination, down 2-0 in the series, this crucial Game 3 went to double overtime with the Raptors eventually gutting out a win. Kawhi Leonard carried the Raptors to victory with 36 points and 9 rebounds

3) Toronto 92 Philadelphia 90, (NBA): 5/12 An absolutely grueling Game 7 in the Eastern Conference Semifinals produced an iconic shot that will go down in NBA history. With the game tied, Kawhi Leonard took a shot from the corner right next to his bench and then watched along with the entire NBA world as the ball defied physics and bounced 4 different times on the rim before dropping through, for the NBA’s 1st ever Game 7 game-winning buzzer beater.

4) Boston 4 Columbus 3 (NHL): 5/4 With the series tied at two,, the Blue Jackets and Bruins combined for 5 goals in the final 10 minutes of the 3rd period, ending with David Pastrnak’s GWG with 1:28 remaining in the 3rd period. Down 2-0 with things looking grim, Columbus tallied 3 goals in a 3:27 span in the 3rd period to tie the game at 3-3 with exactly 6:00 minutes remaining. It wasn’t enough, as Brad Marchand (BOS) recorded his 3rd point of the game with a neat cross ice pass to Pastrnak who re-directed the pass into an open net to give Boston a 3-2 series lead.

5) Golden State 118, Houston 113 (NBA): 5/10 Shorthanded without Kevin Durant and DeMarcus Cousins, the Warriors eliminated the Houston Rockets in a thrilling Game 6. The Warriors were led by the Steph Curry, who scored 33 points in the 2nd half after not scoring a point in the 1st half. Houston was led by their backcourt duo of James Harden and Chris Paul, who combined for 62 points, 19 rebounds, and 11 assists. It wasn’t enough to top Curry and Thompson, who scored 21 points in the 1st half to keep the Warriors in the game before hitting the dagger 3-pointer with 36.1 seconds remaining.

6) Colorado 4 San Jose 3 (NHL): 5/6 At home and facing elimination in Game 6, Colorado’s captain Gabriel Landeskog scored an OT winner to force a decisive Game 7 in San Jose. All 3 of the Avs goals in regulation were scored by their 3rd line, with JT Compher recording 2 of the goals and Tyson Jost scoring the other goal.

7) Golden State 110, Portland 99 (NBA): 5/17 Draymond Green was absolutely scintillating with 20 points, 13 rebounds, and 12 assists, Stephen Curry went for 36 points, and the Warriors overcame an 18-point lead in Portland to take a decisive 3-0 series lead over the Trail Blazers.

8) San Diego 8 Los Angeles 5 (MLB): 5/5 The two Southern California NL West teams squared off in San Diego in an early-May regular season game. The Padres vaulted to an early 3-0 lead behind a monster Franmil Reyes HR and some sparkling defense from Manny Machado and Eric Hosmer. A 3-run HR from Max Muncy and a 2-run HR from Chris Taylor gave the Dodgers a 5-4 lead heading into the bottom of the 9th inning. A Hosmer single, followed by 2 bunt singles loaded the bases for the Padres with no outs. The Dodgers got the next 2 outs before Hunter Renfroe stepped up to the plate and hit a dramatic 2-out walk-off Grand Slam to give the Padres an 8-5 victory.

9) Toronto 105, Milwaukee 99 (NBA): 5/23 With the series heading back to Milwaukee for Game 5 after the home team had won Games 1-4, Toronto pulled out a tight victory that gave the Raptors a chance to win a home game and advance to their 1st ever NBA Finals. Kawhi Leonard once again led the way with 35 points and 7 rebounds, but it was the 9 assists (a career high), that really vaulted the Raptors to this Game 5 victory. However, the Raptors do not win this game without Fred VanVleet going 7-9 from beyond the arc just days after welcoming his 2nd child into this life. Giannis had 24 points in the loss as the Bucks were outscored by 9 points in the 4th Quarter.

10) Golden State 119, Portland 117 (NBA): 5/20 For the 3rd straight game, the Warriors found themselves trailing by 17+ points to the Trail Blazers. For the 3rd straight game, the Warriors climbed all the way back to record a victory, this one coming in OT. In the series-clinching victory, Steph Curry (37 pts, 13 reb,11 ast) and Draymond Green (18 pts, 14 reb, 11 ast) became the 1st teammates in NBA history to each record a triple-double. Meyers Leonard had the game of his career, with 25 1st half points, but it wasn’t enough after Damian Lillard missed a critical shot at the end of the game.

Jerry Milani is a freelance writer and public relations executive living in Bloomfield, N.J. He has worked in P.R. for more than 30 years in college and conference sports media relations, two agencies and for the International Fight League, a team-based mixed martial arts league, and now is the PR manager for FAN EXPO, which runs pop culture and celebrity conventions across North America. Milani is also the play-by-play announcer for Caldwell University football and basketball broadcasts. He is a proud graduate of Fordham University and when not attending a Yankees, Rams or Cougars game can be reached at Jerry (at) JerryMilani (dot) com.
@gbpackjerry
Previous Football Star DK Metcalf Partners with Nestlé Nesquik
Next U.S. Open Golf Logo Ready For Fox Sports Audience