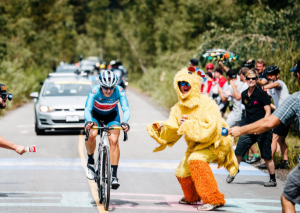 The 2019 Colorado Classic presented by VF Corporation will put women’s racing on a world stage with game-changing live start-to-finish coverage each day of the race (August 22-25) and distribution to fans around the world over a pioneering streaming, social media and TV network.

“We are putting women’s pro racing on a world media stage like never before,” said Rob Simon, RPM Events Group CMO and Executive Producer. “With unprecedented live coverage from the start of the race through the podium award ceremonies, and free worldwide distribution through streaming and TV partners, we’re creating a game-changing media platform for professional women cycling. For most of the teams and riders in our race, it will be the first time they can tell their fans to tune-in and watch the race every day, start-to-finish.”

The distribution network will include live streaming on the Colorado Classic “Watch Now” page and syndication through an embedded Livestream player on nearly 25 partner and cycling media websites, including the teams and racers themselves. The production will be simulcast on social media on Colorado Classic’s Facebook page and YouTube channel, where it can be watched, shared and commented on around the world.

Global Cycling Network (GCN) will provide an English-language show with commentary from Marty MacDonald and ex-pro cyclists Dani Rowe (Stages 1-2) and Hannah Walker (Stages 3-4), and a Spanish-language show with commentary from Andres Canovas Rubio. Both will be distributed on GCN’s English and Spanish Facebook and YouTube channels. GCN provided similar live coverage of the race last year as well.

The distribution will break new ground with a pioneering “localized” broadcast powered by Kiswe and its award-winning CloudCast technology, enabling a commentator to call the race — live — in their native language from anywhere in the world. This is the first time that Kiswe technology will be used to cover a cycling event. The Colorado Classic will be CloudCast by cycling media reporter Rebecca Reza in Spanish from her base Texas and distributed through a new cycling media company in Costa Rica, GPSeries1, on their website, Facebook and YouTube channels.

Domestically, Altitude Sports and AltitudeNOW, the official cable and satellite partner of the Colorado Classic, will broadcast each day’s race live with additional evening replays. “Couldn’t be more excited to have the Colorado Classic back on Altitude and with a great new format showcasing the strength and competitive spirit of women’s professional cycling,” said Doug Ballmer, Altitude’s Senior Director of Programming.

Seen in more than 2.5 million homes in a 10-state territory, Altitude TV is the television home of the Denver Nuggets, Colorado Avalanche, Colorado Mammoth, Colorado Rapids, Denver Outlaws, University of Denver sports (hockey, basketball, soccer, volleyball, gymnastics and lacrosse), University of Colorado and Rocky Mountain Athletic Conference shows, CHSAA High School Football Game of the Week, as well as other local and regional sports, entertainment and public service programming. A full list of Altitude TV programming and other information can be found at www.altitudesports.com.

For a schedule of streaming and Altitude TV times, click HERE.

The race broadcast is being produced with innovative story-telling and immersive production values by Citizen Pictures, a Colorado-based Emmy-winning TV production company. They will be using new technologies such as cellular HD mobile cameras, POV cameras in the caravan and on bikes and drones to create a more immersive and engaging experience. The announce team includes pros Brad Sohner and Meredith Miller. As part of its story-telling, Citizen Pictures also produced nearly a dozen HERoes videos — up-close-and-personal profiles of women racers and cyclists that tell the women’s stories on and off the bike. The HERoes videos will become part of the broadcast and are also available on YouTube.

This production approach and streaming network will not only give the race greater potential reach around the world, and help the race find new audiences, it also will allow fans to watch the race the way they watch TV today — on any device, anytime and anywhere — and with the ability to engage with the coverage — sharing, liking, and commenting on social while the action is happening.

The Colorado Classic® presented by VF Corporation (Aug 22-25, 2019) is one of the premiere standalone pro women’s cycling races in the world. Nearly 100 of the world’s best racers from 16 teams will compete in the UCI 2.1 four-stage race, coursing through Steamboat Springs, Avon, Golden and Denver. More than a race, the Colorado Classic is a game-changing movement, advancing opportunity in women’s pro cycling with harder, longer routes; higher prize money; unprecedented team support; and daily live TV streaming coverage start-to-finish that puts women’s racing on a global stage like never before. Bicycling Magazine named the Colorado Classic one of 13 races in the world not to be missed this year.

Jerry Milani is a freelance writer and public relations executive living in Bloomfield, N.J. He has worked in P.R. for more than 30 years in college and conference sports media relations, two agencies and for the International Fight League, a team-based mixed martial arts league, and now is the PR manager for FAN EXPO, which runs pop culture and celebrity conventions across North America. Milani is also the play-by-play announcer for Caldwell University football and basketball broadcasts. He is a proud graduate of Fordham University and when not attending a Yankees, Rams or Cougars game can be reached at Jerry (at) JerryMilani (dot) com.
@gbpackjerry
Previous How Twitter Can Increase Sport’s Brand Loyalty
Next NXT Moves To USA Network