Home / News / The Doctor is in! Julius Erving House Call with Dr. J on reVolver Podcasts

The Doctor is in! Julius Erving House Call with Dr. J on reVolver Podcasts

Jerry Milani February 12, 2018 News, On The Air Comments Off on The Doctor is in! Julius Erving House Call with Dr. J on reVolver Podcasts 2,321 Views 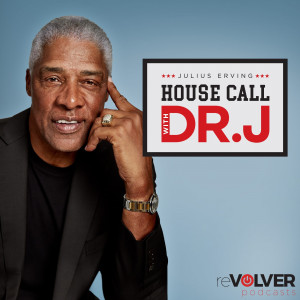 Get ready for the highly anticipated launch of House Call with Dr. J. on reVolver Podcasts. Hosted by the NBA legend himself, Julius Erving, House Call with Dr. J. will feature interviews and discussions with star athletes, celebrities and people of interest who have dared to be great. Guests will share impactful life moments and experiences that helped shape them, ultimately leading to their incredible achievements. Erving will record the first episode during NBA All-Star Weekend in Los Angeles at ONE COURT.

“I’m excited to launch this podcast in partnership with reVolver,” said Erving. “One of my biggest passions is educating, mentoring and inspiring people to achieve greatness. I look forward to sharing the incredible stories and remarkable achievements of my guests, and hope that they will empower my listeners.”

“Dr. J was one of the first athlete superstars. He captivated audiences with his ability, strength and grace both on and off the court,” said Jack Hobbs, president of reVolver Podcasts. “I’m thrilled to have Mr. Erving in our line-up and know he’s going to wow our listeners and leave them on the edge of their seats, wanting more.”

House Call with Dr. J launches on Monday, Feb. 19 and will cover everything from youth and education to entertainment and business, as well as life in and outside of basketball.

Julius Erving, the great and wondrous “Dr. J,” was the dominant player of his era, an innovator who changed the way the game was played. Credited with taking the slam dunk mainstream, the high-flyer won three championships, four MVP awards in the ABA and NBA, three scoring titles with the ABA and NBA, was a 16-time All Star and retired as the third highest scorer in pro basketball history with 30,026 career points. Erving was inducted into the Basketball Hall of Fame in 1993 and named to the NBA’s 50thAnniversary All-Time Team. Sports Illustrated called him one of the 40 most important athletes of all-time.

Jerry Milani is a freelance writer and public relations executive living in Bloomfield, N.J. He has worked in P.R. for more than 30 years in college and conference sports media relations, two agencies and for the International Fight League, a team-based mixed martial arts league, and now is the PR manager for FAN EXPO, which runs pop culture and celebrity conventions across North America. Milani is also the play-by-play announcer for Caldwell University football and basketball broadcasts. He is a proud graduate of Fordham University and when not attending a Yankees, Rams or Cougars game can be reached at Jerry (at) JerryMilani (dot) com.
@gbpackjerry
Previous Daytona 500 Coverage Live on SiriusXM
Next YuppTV to Exclusively Broadcast Hero Nidahas Trophy 2018