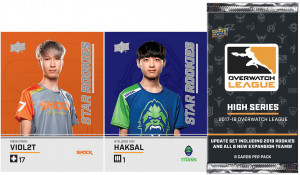 The High Series product adds content from the league’s eight expansion teams, along with 90 new rookies from across the entire league. The new release comes just in time for the sold-out Overwatch League Grand Finals taking place at Wells Fargo Center in Philadelphia this weekend. In celebration of the event and the new product launch, Upper Deck will be offering free sample packs and exclusive Grand Finals-themed digital content to all fans in attendance, as well as the opportunity to have a personalized Overwatch League trading card created onsite. The company will also host a trading zone at the Grand Finals Fan Fest event where fans can trade cards with Upper Deck staff and get a first-hand look at samples of some rare inserts and achievements from the new Overwatch League card set.

“Everyone has been eagerly awaiting the release of the High Series,” said Bubby Johanson, Director of Game Development at Upper Deck. “Not only does it introduce cards for the eight new expansion teams, but it also debuts never-before-seen short-printed Star Rookies cards. We are excited to see these highly coveted rookie cards in the hands of Overwatch League fans.”

“I’m incredibly proud to be working with Upper Deck to release new card packs so quickly,” said Daniel Siegel, head of esports licensing at Blizzard Entertainment. “Delivering a second set of cards during the 2019 season that celebrates all 20 of our amazing teams is a wonderful achievement that allows our fans to collect keepsakes for all of their favorite Overwatch League players.”

Overwatch League High Series trading card packs will be available starting at 9:00am PDT on www.UpperDeckEpack.Com. For more details about the Inaugural Season Set or the new High Series Update set, including a downloadable checklist poster and details on how to buy, open, collect and trade Overwatch League cards with fans around the world, visit www.UpperDeck.com/OWL.

Jerry Milani is a freelance writer and public relations executive living in Bloomfield, N.J. He has worked in P.R. for more than 30 years in college and conference sports media relations, two agencies and for the International Fight League, a team-based mixed martial arts league, and now is the PR manager for FAN EXPO, which runs pop culture and celebrity conventions across North America. Milani is also the play-by-play announcer for Caldwell University football and basketball broadcasts. He is a proud graduate of Fordham University and when not attending a Yankees, Rams or Cougars game can be reached at Jerry (at) JerryMilani (dot) com.
@gbpackjerry
Previous Being At The FanHub Of Gaming…
Next EA SPORTS FIFA 20 Returns With New VOLTA FOOTBALL Mode