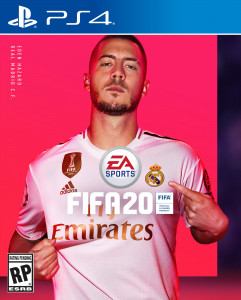 Electronic Arts Inc. last week launched EA SPORTS™ FIFA 20 across PlayStation®4, Xbox One, and PC. Fans can experience the brand-new VOLTA FOOTBALL mode, inspired by the small-sided form of football played in the streets, cages and futsal courts across the world. Players can also jump into FIFA Ultimate Team™ to play new social experiences such as FUT Friendlies or check out Season Objectives where they can unlock new club customization content.

Since EA Access** and Origin Access** launch last week, millions of players around the world have already started to build their dream squads and gone head-to-head on the pitch, with more than 57 million total matches played, 3.2 million squads created, and over 52 million goals scored in the game.

“Each year we look to add more ways for our players to engage, from mode innovations to gameplay mechanics to delivering the most authentic experience to date,” said Aaron McHardy, Executive Producer for EA SPORTS FIFA. “This year, we’ve also introduced VOLTA FOOTBALL that adds a completely new dimension to the game and brings FIFA 20 back to the streets and futsal courts where a lot of football players from all over the world started out. It’s an experience our players have asked us to bring back, which we’re excited to deliver as we continue to build the world’s game.”

In VOLTA FOOTBALL, players build their own character, express their individual style, and immerse themselves in a realistic small sided experience. A brand-new style of gameplay grounded in football realism immerses players in the flow of the street with new tools including simplified flicks and skill moves, new flair animations, or using the wall as a teammate.

In addition, more than 30 official leagues, 700 teams, 17,000 authentic players, and 90 licensed stadiums from all over the world bring one of the most authentic sports video games to life. Check out all the available licenses, including exclusive access to the world’s biggest competitions, from the pinnacle of club football with the UEFA Champions League to the unrivalled fandom of the Bundesliga, Premier League, LaLiga Santander and so much more here.

Fans of EA SPORTS FIFA can also jump into the newly released season of FIFA Mobile on iOS and Android to challenge friends in real-time 11v11 matches, play over 650 new events against real-world clubs in World Tour, and earn rewards to climb to the top of tiered leaderboards. To see all the latest ways to play in FIFA Mobile, check out www.ea.com/games/fifa/fifa-mobile.

EA Access** and Origin™ Access** Basic subscribers can enjoy up to 10 hours of play time, along with 10% off the purchase of the full game. Origin Access Premier subscribers get all the benefits of Basic on top of full access to the game on PC for as long as they are subscribed. Additionally, EA Access and Origin Access subscribers can unlock a new custom kit each month in EA SPORTS FIFA Ultimate Team™ as an exclusive reward for the first 5 months***.

FIFA 20 is developed by EA Vancouver and EA Romania and is available worldwide today on PlayStation® 4, Xbox One, and PC. Join the EA SPORTS FIFA community at Facebook and on Instagram, or follow us on Twitter @easportsfifa.

Jerry Milani is a freelance writer and public relations executive living in Bloomfield, N.J. He has worked in P.R. for more than 30 years in college and conference sports media relations, two agencies and for the International Fight League, a team-based mixed martial arts league, and now is the PR manager for FAN EXPO, which runs pop culture and celebrity conventions across North America. Milani is also the play-by-play announcer for Caldwell University football and basketball broadcasts. He is a proud graduate of Fordham University and when not attending a Yankees, Rams or Cougars game can be reached at Jerry (at) JerryMilani (dot) com.
@gbpackjerry
Previous Upper Deck Releases High Series For Overwatch League Finals
Next TuneIn Launches BetR Network