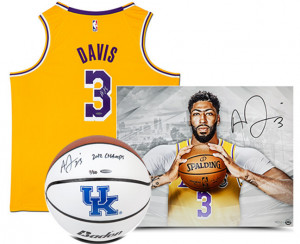 The Upper Deck Company, the worldwide leader in sports memorabilia, is excited to announce the addition of Anthony Davis to its Upper Deck Authenticated ever-growing roster of exclusive superstar athletes. Earlier this month, the new Los Angeles Lakers star signed a full collection of memorabilia items that launched today on UpperDeckStore.com.

Hailing from Chicago, Davis was the #1 high school basketball recruit in the country in 2011. As a freshman at Kentucky the following year, he led the team to a National Championship and was named the Naismith College Player of the Year, along with being a unanimous first team All-American.

Following his historic season and well-deserved hype, Davis entered the 2012 NBA Draft and went first overall to New Orleans. That same season, Davis earned the NBA Rookie of the Year Award while also contributing to the USA Basketball Men’s National Team’s gold medal. Often referred to by his nickname “The Brow”, Davis has racked up some impressive accolades. He is a 6x NBA All-Star, has been voted to the All-NBA First Team three times, and is the youngest player to score 59 points in a game. 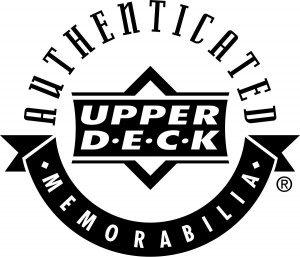 “We couldn’t be more pleased to add an athlete of Anthony’s caliber to our talented roster,” said Jason Masherah, President of Upper Deck. “He has been one of the most exciting players to watch on both ends of the court, and we believe that the best is still to come.”

Earlier this year Davis was traded to the Los Angeles Lakers where he will start the season as a perennial All-Star.

Jerry Milani is a freelance writer and public relations executive living in Bloomfield, N.J. He has worked in P.R. for more than 30 years in college and conference sports media relations, two agencies and for the International Fight League, a team-based mixed martial arts league, and now is the PR manager for FAN EXPO, which runs pop culture and celebrity conventions across North America. Milani is also the play-by-play announcer for Caldwell University football and basketball broadcasts. He is a proud graduate of Fordham University and when not attending a Yankees, Rams or Cougars game can be reached at Jerry (at) JerryMilani (dot) com.
@gbpackjerry
Previous Pat Forde Joins SI as Senior Writer
Next Mike Krzyzewski Inks Multi-Year Extension with SiriusXM