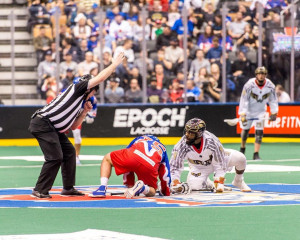 In a move that is geared towards maximum exposure for the league, the National Lacrosse League (NLL) today announced that a “Game of the Week” will stream live and free across its broadcast partner B/R Live domestically and on Twitter and Facebook across the globe, beginning with Saturday’s New England Wolves vs. Saskatchewan matchup in Canada.

The schedule will continue through the end of the regular season in April, and each of the league’s 13 teams will be featured at least once.

The schedule is as follows:

“We are thrilled to be able to augment our growing presence on B/R Live with the NLL Game of the Week,” said NLL Commissioner Nick Sakiewicz in a statement.  “These games will feature some of the best matchups in our league as well as many of our greatest personalities and athletes, and are a great next step as we continue to engage our digital audience and expand the reach of all that our league, and the game of lacrosse, has to offer to both the engaged fan and the casual seeker of high octane sports action.”

Jerry Milani is a freelance writer and public relations executive living in Bloomfield, N.J. He has worked in P.R. for more than 30 years in college and conference sports media relations, two agencies and for the International Fight League, a team-based mixed martial arts league, and now is the PR manager for FAN EXPO, which runs pop culture and celebrity conventions across North America. Milani is also the play-by-play announcer for Caldwell University football and basketball broadcasts. He is a proud graduate of Fordham University and when not attending a Yankees, Rams or Cougars game can be reached at Jerry (at) JerryMilani (dot) com.
@gbpackjerry
Previous Six Sports Fanbases Among Top 10 In 2019: Report
Next The Basketball League and SportsCastr Announce Exclusive Streaming Partnership