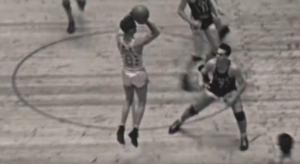 Jump Shot, the documentary that uncovers the inspiring true story of Kenny Sailors, the developer of the modern day jump shot in basketball, is set for a special one night only theatrical event on April 2. The film, executive produced by Stephen Curry‘s Unanimous Media, will be released in more than 250 movie theaters nationwide through distributor Aspiration Entertainment in partnership with the global event cinema leader Trafalgar Releasing.

Introducing his never before seen ‘leaping one-hander’ to the masses on a national level, Kenny quickly grew to be a fan favorite while leading his Wyoming Cowboys to the NCAA Championship in Madison Square Garden in 1943. But after serving his country in WW2 and playing in an unstable, emerging league now known as the NBA, Kenny disappeared into the Alaskan wilderness only to be forgotten by the sport he helped pioneer. Now, nearly sixty years later, the multitude of people he has touched along the way have forced Kenny’s humble reemergence. Kenny was not only an NBA pioneer, but also a coach, high school teacher, champion for female athletes, marine, true cowboy and homesteader in the Alaskan frontier, a father, husband, and man of faith.

“Ever since I picked up a basketball, the jump shot was second nature to me,” says executive producer and NBA superstar Stephen Curry. “Learning the history of where the art of the jump shot came from, who introduced it to the game, and how it changed the game, was incredibly intriguing. Even more importantly, learning about the person that Kenny was, and what he stood for, was very inspirational. He was a selfless, special person that had the right perspective about life. The film not only explores his impact on the game, but his calling and all the different places that took him, whether it was serving in the military, or playing in the NBA, or being with his family. There’s so many people like myself that don’t know Kenny Sailors, and I’m proud to help share his story with the world.”

“Kenny played an instrumental role in developing, pioneering, and popularizing what we now know as the modern-day jump shot, which has become the primary offensive weapon in basketball,” says director Jacob Hamilton. “But, like most people, I had never heard the name Kenny Sailors. He is a man who defined the game basketball with its greatest innovation, but when you sit down and have a real conversation with him, you’ll quickly come to the conclusion that the game never defined who he was. He was a family man, community leader, military veteran, and an advocate for female athletes. Those were what he was most proud of. My hope is that this film celebrates the life of an extraordinary man that people of all ages, backgrounds, upbringings can admire and also inspires audiences to explore what the most important things in their lives are.”

Kymberli Frueh, SVP for Programming and Acquisitions at Trafalgar Releasing added: “We are so excited to bring people together in cinemas to share in the life story of Kenny Sailors. Whether you are a basketball fan or not, understanding the impact Sailors had on the game and in his community will inspire us all.”

The April 2 event will include exclusive programming from Curry, director Jacob Hamilton, and other special guests. Tickets are on sale now and can be purchased from https://tickets.jumpshotmovie.com.

Jerry Milani is a freelance writer and public relations executive living in Bloomfield, N.J. He has worked in P.R. for more than 30 years in college and conference sports media relations, two agencies and for the International Fight League, a team-based mixed martial arts league, and now is the PR manager for FAN EXPO, which runs pop culture and celebrity conventions across North America. Milani is also the play-by-play announcer for Caldwell University football and basketball broadcasts. He is a proud graduate of Fordham University and when not attending a Yankees, Rams or Cougars game can be reached at Jerry (at) JerryMilani (dot) com.
@gbpackjerry
Previous 2020 SportsCon Officially Returns To Dallas July 10-12
Next beIN SPORTS XTRA Launches on Pluto TV