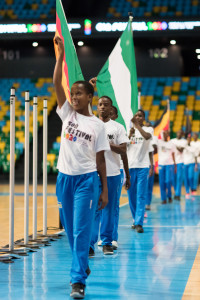 The first-ever Giants of Africa festival – a week-long celebration focused on youth, basketball, empowerment and education – is to be held in Kigali, Rwanda this summer. The Giants of Africa Festival will bring together boys and girls from 11 African countries to highlight and celebrate each country’s unique culture and tradition, and two hundred youth from Nigeria, Senegal, Cameroon, Mali, Kenya, Rwanda, Tanzania, Uganda, Democratic Republic of the Congo, South Sudan and Somalia will participate in the week-long festivities.

His Excellency President Paul Kagame of the Republic of Rwanda was joined by Masai Ujiri, the president of the Toronto Raptors and Giants of Africa, to make the announcement. The event will run from Aug. 16 to 22, and will also feature special events and concerts open to the public.

“Over the past 17 years, I have witnessed the transformative impact that basketball can have on African youth,” Ujiri said.  “This latest evolution of our Giants of Africa summer programming is going to be unbelievable.  For the first time, youth from countries across Africa will have an opportunity to meet, learn about other cultures and build camaraderie with their peers, who share a common love of the game.  Basketball opened so many doors for me, and I’m excited to support this next generation of African giants achieve their dreams.”

“I am sure those who will be coming here whether it is the first time or one of many times, they will discover that we are a welcoming people and country,” President Kagame said. “We won’t just be writing it on the billboards, we want to make sure the experience is real and felt by whoever comes. And the people of this country always leave our history behind us and keep going towards the future much as we draw lessons from that. We are people of high ambitions, who work hard and want to be happy despite those challenging circumstances they have had to deal with and still have to deal with.”

The festival will also include a Dream Big Leadership Conversation Series, which will focus on education and female empowerment. The series will feature discussions with thought leaders from around the world with the goal of inspiring campers to think big, be innovative, build confidence and become leaders in their own community. Africa is the youngest continent in the world, with over 60 percent of the continent’s population under 25.

Growing up in Nigeria, Ujiri’s love of basketball paved his way to become the first African-raised general manager for a major North American sports team. In 2003, he co-founded Giants of Africa, a not-for-profit that leverages basketball as a tool for young boys and girls to “Dream Big” – the motto the organization lives by – so they can maximize opportunities for their future. Over the last 17 years, Giants of Africa has conducted youth basketball camps on the continent, and has expanded its footprint and programming across the continent and beyond the game by prioritizing skills training and personal development.  In addition to activating basketball camps and community outreach initiatives in August, Giants of Africa’s coaching staff also provides training and support to local coaches to hone their skills.

Jerry Milani is a freelance writer and public relations executive living in Bloomfield, N.J. He has worked in P.R. for more than 30 years in college and conference sports media relations, two agencies and for the International Fight League, a team-based mixed martial arts league, and now is the PR manager for FAN EXPO, which runs pop culture and celebrity conventions across North America. Milani is also the play-by-play announcer for Caldwell University football and basketball broadcasts. He is a proud graduate of Fordham University and when not attending a Yankees, Rams or Cougars game can be reached at Jerry (at) JerryMilani (dot) com.
@gbpackjerry
Previous SLAM x FaZe Clan Pop-Up Call of Duty Tournament Featured eSports, NBA Superstars
Next PlayersTV To Launch In March With Sports Lifestyle Content