Jerry Milani September 1, 2020 News, On The Air Comments Off on Perfect Game Announces the Launch of PERFECTGAME.TV 1,081 Views 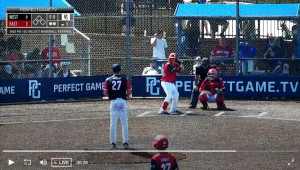 The world’s largest elite youth baseball and softball platform and scouting service, Perfect Game, announced today the launch of the only streaming network devoted to the sport at the grassroots level, PERFECTGAME.TV.

Buoyed by 1,500 annual events (36,000+ games), 475,000 participating players and a website supported by 17 million unique visitors annually, PERFECTGAME.TV will live-stream all of its premier events, such as the PG “All-American Classic”, 12u-13u-14u Select Festivals, 13u-14u-Junior-National Showcases, all championships at all ages at the PG World Series, WWBA National Championship and WWBA World Championship. In the near future PERFECTGAME.TV will be the on-demand platform to every single Perfect Game contest at every level. In preparation for the launch, PERFECTGAME.TV has spent three years producing original content including in-depth player profiles, documentaries, MLB alumni specials, event recap shows, PG SiriusXM program simulcasts and insightful instructional programming. The network will continue to generate engaging new content regularly.

“We have been diligently working towards this launch for years. The number one goal of Perfect Game is, and always has been, to grow the game. This network has been built in the very same vein. Our hope is to bring the games to those who are unable to attend in-person and those who passionately play and follow amateur baseball. From the games to the stories of the athletes, PERFECTGAME.TV will engage and inspire 24 hours a day, every day.” —Jerry Ford, Founder and President, Perfect Game

Emmy Award Winner Daron Sutton will serve as the Executive Producer and Host of the newly formed PERFECTGAME.TV. Sutton, who has been with Perfect Game since 2016 and the television voice of the “All-American Classic” since 2008, served as the MLB play-by-play announcer for the Los Angeles Angels, Milwaukee Brewers and Arizona Diamondbacks in a 15-year span.

Jerry Milani is a freelance writer and public relations executive living in Bloomfield, N.J. He has worked in P.R. for more than 30 years in college and conference sports media relations, two agencies and for the International Fight League, a team-based mixed martial arts league, and now is the PR manager for FAN EXPO, which runs pop culture and celebrity conventions across North America. Milani is also the play-by-play announcer for Caldwell University football and basketball broadcasts. He is a proud graduate of Fordham University and when not attending a Yankees, Rams or Cougars game can be reached at Jerry (at) JerryMilani (dot) com.
@gbpackjerry
Previous Jordan Jerseys, Mattingly Mercedes-Benz Among CollectibleXChange Midsummer Auction Items
Next 146th Kentucky Derby Airs Live Nationwide on SiriusXM