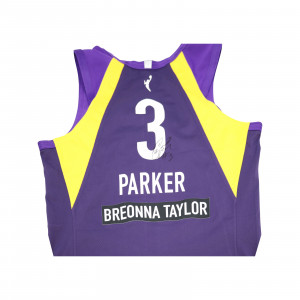 The WNBA players and their teams continue the fight for social justice with a major on-line auction that will benefit The Breonna Taylor Foundation and The African-American Policy Forum’s #SayHerName Mothers Network on CollectibleXchange.com.

The announcement was made today by CollectibleXchange founder Brandon Steiner.

Jerry Milani is a freelance writer and public relations executive living in Bloomfield, N.J. He has worked in P.R. for more than 30 years in college and conference sports media relations, two agencies and for the International Fight League, a team-based mixed martial arts league, and now is the PR manager for FAN EXPO, which runs pop culture and celebrity conventions across North America. Milani is also the play-by-play announcer for Caldwell University football and basketball broadcasts. He is a proud graduate of Fordham University and when not attending a Yankees, Rams or Cougars game can be reached at Jerry (at) JerryMilani (dot) com.
@gbpackjerry
Previous Buzzer Secures $4 Million Seed Funding Led by Lerer Hippeau and Sapphire Sport
Next Sport For Good Day Saturday Encourages Youth, Families To Get Out And Play