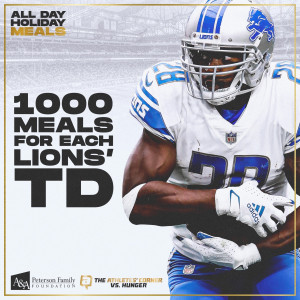 The Athletes’ Corner last week announced one of its first initiatives in its fight against hunger, teaming up with Former NFL MVP and Detroit Lions RB Adrian Peterson to launch – ‘All Day Holiday Meals‘.

The program connects wins on the field, with wins in the community. The Athlete’s Corner and Peterson’s, A&A Peterson Family Foundation will partner to deliver 1,000 meals to Detroit families in need for each touchdown the Lions score during home games in Nov. and Dec.

2,000 meals will be donated for each TD that Peterson scores.

“The Adrian and Ashley Peterson Family Foundation has been committed to making positive change in each of the communities I’ve played in. With The Athletes’ Corner we’ve found a partner that shares that vision and sees the immediate need of helping the people of Detroit bring food home to their families. I’m always motivated to score touchdowns, but knowing that we are helping those in need while also helping the Lions win makes it even better.” — Adrian Peterson, Detroit Lions RB

“Adrian is one of the greatest running backs the game of football has ever seen, but he’s just as great in the work he does off the field. As an organization committed to supporting people through sports, we are thrilled to partner with Adrian and hope he and the Lions find the endzone time after time this holiday season.” — Kelenna Azubuike, Former NBA Player & Co-Founder of The Athletes’ Corner.

‘All Day Holiday Meals’ kicks off this Sunday, as the Detroit Lions host the Indianapolis Colts at 1 p.m. ET on CBS.

Jerry Milani is a freelance writer and public relations executive living in Bloomfield, N.J. He has worked in P.R. for more than 30 years in college and conference sports media relations, two agencies and for the International Fight League, a team-based mixed martial arts league, and now is the PR manager for FAN EXPO, which runs pop culture and celebrity conventions across North America. Milani is also the play-by-play announcer for Caldwell University football and basketball broadcasts. He is a proud graduate of Fordham University and when not attending a Yankees, Rams or Cougars game can be reached at Jerry (at) JerryMilani (dot) com.
@gbpackjerry
Previous Yonkers, N.Y. HS Football Featured In Upcoming Short Film ‘I Got Your Back’
Next Masters 2020, Live and Nationwide on SiriusXM