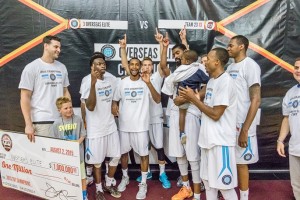 As part of the partnership, TBT will reserve the 16th spot in each of the tournament’s four regions (Northeast, South, Midwest, West) for the team in each region that raises the most money to support their local Big Brothers Big Sisters affiliate through GoFundMe. Teams can create their GoFundMe campaign starting June 2 at 12 p.m. EST, and they can raise money until June 13 at 12 p.m. EST.

“This partnership with GoFundMe and Big Brothers Big Sisters not only gives teams another way of getting into the tournament, but it will also benefit the communities in which we play,” said Jon Mugar, CEO and founder of The Basketball Tournament. “One thing we’ve learned since announcing a $2 million prize is that it’s going to be difficult to become one of the 64 teams selected. We already have hundreds of teams applying. By nature of our process, our teams and fans are already social media savvy, grassroots organizers, so fundraising should come naturally to them.”

TBT’s social media driven application process is housed on TheTournament.com. The field will be made up of 64 teams who will play in four regions of 16 apiece. The top vote-getters in each region will receive “automatic” bids.  TBT will select the remaining at-large teams in each region – with the exception of the teams that win the GoFundMe charity fundraising competition, who are also guaranteed spots.   The 64-team field will then compete for the $2,000,000 winner-takes-all grand prize. The top 100 fans of the winning team will share 10% of the prize, splitting $200,000.

TBT’s 2015 field included hundreds of players who have competed at the highest levels all over the world. Overseas Elite, a team of veteran international professional players, won last year’s $1 million winner-take-all title at historic Rose Hill Gymnasium. Fans who voted for Overseas Elite shared in the winnings, taking home a combined $50,000 of the grand prize. The Notre Dame Fighting Alumni, a squad made up of some of the best players in University of Notre Dame history, won the inaugural title and $500,000 in 2014.

Jerry Milani is a freelance writer and public relations executive living in Bloomfield, N.J. He has worked in P.R. for more than 30 years in college and conference sports media relations, two agencies and for the International Fight League, a team-based mixed martial arts league, and now is the PR manager for FAN EXPO, which runs pop culture and celebrity conventions across North America. Milani is also the play-by-play announcer for Caldwell University football and basketball broadcasts. He is a proud graduate of Fordham University and when not attending a Yankees, Rams or Cougars game can be reached at Jerry (at) JerryMilani (dot) com.
@gbpackjerry
Previous Amy Lawrence Named ‘Voice of the New York Empire’
Next Strat-O-Matic Documentary Coming this Father’s Day