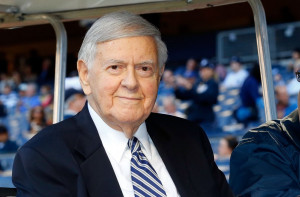 The late, legendary sportscaster Bob Wolff, one of the most prolific and recognizable voices in sports broadcast history, has been selected to be the 10th recipient of the Vin Scully Lifetime Achievement Award in Sports Broadcasting from WFUV Radio (90.7 FM/wfuv.org), the noncommercial, member-supported public media service of Fordham University for nearly 70 years.  Award-winning PBS News Hour anchors Judy Woodruff and the late Gwen Ifill will receive the Charles Osgood for Excellence in Broadcast Journalism.

The Awards will be presented on Wednesday night, November 1, at “On the Record: A Celebration of Achievement in News and Sports Broadcasting,” a benefit for WFUV, in the Costantino Room at Fordham School of Law (150 W. 62nd Street, NYC).
The Scully Award recognizes the iconic baseball broadcaster, who last year completed his 67th and final season as “Voice of the Dodgers” and is a renowned Fordham alumnus (1949). WFUV was the launching pad to his Hall of Fame broadcast career.
The Osgood Award acknowledges the distinguished Fordham/WFUV Radio alumnus (1954) who was the long time, four-time Emmy Award-winning anchor of CBS Sunday Morning, and continues to bring his wit and wisdom to the airwaves with The Osgood File on CBS Radio.
CBS Evening News interim anchor and co-host of CBS This Morning: Saturday Anthony Mason will host an armchair discussion with Rick Wolff, Bob’s son, and Woodruff, reflecting on two extraordinary careers. Alice Gainer, FCRH ’04, CBS 2 reporter and co-anchor for WLNY-TV News, will serve as emcee for the evening.
Before his passing on July 15 at age 96, Mr. Wolff had received the call from Mr. Scully, and was delighted to hear the news. His son Rick Wolff will accept on his behalf. Another distinguished baseball broadcaster, Fordham alumnus (FCRH ’82) and WFUV product, Michael Kay, the television “Voice of the New York Yankees” on YES Network and ESPN NY 98.7 FM Radio host of The Michael Kay Show, will make the presentation on behalf of Mr. Scully and WFUV.
Wolff is credited as the only sportscaster to call the play-by-play of championships in all four major professional team sports – the NFL’s championship, baseball’s World Series, basketball NBA Finals and hockey’s Stanley Cup. He interviewed Babe Ruth, was the original voice of the Washington Senators in 1947, and was the Voice of the New York Knicks for both the franchise’s championship teams.
A special tribute will recognize Bob Ahrens, who recently retired after 20 years of service at WFUV as the station’s executive sports producer.
Exceptional WFUV student broadcasters John Furlong (FCRH ’18) for Sports and Kacie Candela (FCRH ’19) for News will also be among those honored. On the Record is designed to raise funds and elevate awareness with regard to WFUV’s news and sports training programs.
Previous Scully Award recipients include: inaugural honoree Scully (2008), Dick Enberg (2009), Ernie Harwell (2010), Pat Summerall (2011), Al Michaels (2012), Bob Costas (2013), Verne Lundquist (2014), Mike “Doc” Emrick (2015), and Brent Musburger (2016).
Previous Osgood Award recipients include: inaugural honoree Osgood (2008), Jim Lehrer (2009), Bob Schieffer (2010),Tom Brokaw (2011). Christiane Amanpour (2012), Sam Donaldson (2013), Scott Simon (2014), Charlie Rose (2015), and Lesley Stahl (2016).
The two Fordham icons continue to receive plaudits. Scully received The Icon Award at the ESPYs earlier this year, and Osgood will be the recipient of an Emmy for Lifetime Achievement in October.
Broadcast journalist Judy Woodruff is the Anchor and Managing Editor of the PBS NewsHour. She has covered politics and other news for more than four decades at CNN, NBC and PBS.
Gwen Ifill served as moderator and managing editor of Washington Week and co-anchor and managing editor ofPBS NewsHour until her death in November 2016.
For more information and to purchase tickets, contact Alexis Harrigan at  aharrigan@wfuv.org or 212-636-6508.
2017-09-20
Jerry Milani
Share

Jerry Milani is a freelance writer and public relations executive living in Bloomfield, N.J. He has worked in P.R. for more than 30 years in college and conference sports media relations, two agencies and for the International Fight League, a team-based mixed martial arts league, and now is the PR manager for FAN EXPO, which runs pop culture and celebrity conventions across North America. Milani is also the play-by-play announcer for Caldwell University football and basketball broadcasts. He is a proud graduate of Fordham University and when not attending a Yankees, Rams or Cougars game can be reached at Jerry (at) JerryMilani (dot) com.
@gbpackjerry
Previous Rugby Keeps Growing As China, Ireland Sevens Make First-Ever Trip To The US
Next Stephen Curry Signs Exclusive Collectibles Deal with Steiner Sports Memorabilia