Jerry Milani February 26, 2018 News, On The Air Comments Off on SEC Network Reporting from all 14 SEC Football Pro Days 3,070 Views 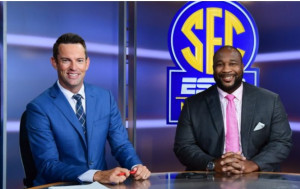 For the third straight season, SEC Network is featuring all 14 SEC Football Pro Days in its studio programming, beginning with College Football Playoff National Champion Alabama on Wednesday, March 7. Commentators will be on site and in studio covering news and interviews from each event for SEC Now and The Paul Finebaum Show.

ESPN will have additional Pro Day coverage from around the country on various shows, including SportsCenter and NFL Live, with details announced at a later date.

Jerry Milani is a freelance writer and public relations executive living in Bloomfield, N.J. He has worked in P.R. for more than 30 years in college and conference sports media relations, two agencies and for the International Fight League, a team-based mixed martial arts league, and now is the PR manager for FAN EXPO, which runs pop culture and celebrity conventions across North America. Milani is also the play-by-play announcer for Caldwell University football and basketball broadcasts. He is a proud graduate of Fordham University and when not attending a Yankees, Rams or Cougars game can be reached at Jerry (at) JerryMilani (dot) com.
@gbpackjerry
Previous New Season Of Beach Volleyball Returns To Pac-12 Networks
Next BNP Paribas Open Partners With YinzCam To Launch New Mobile App In Advance Of 2018 Tournament